The Motorola Droid Razr / Motorola Razr is very thin Android smartphone with a 4.3 inch touch display. With only 7.1 mm depth, it is one of the thinnest smartphones available regardless of display size. The RAZR will be called DROID RAZR when sold by Verizon in the US and the network bands are CDMA800, CDMA900, CDMA2000, LTE 700. The GSM version named Motorola RAZR will have GSM network bands 850/900/1800/1900, 3G 900/2100, UMTS, HSDPA. Motorola claims that the RAZR is the "world's thinnest 4G LTE smartphone". Technically LTE is not 4G which makes the claim is easy to dispute. 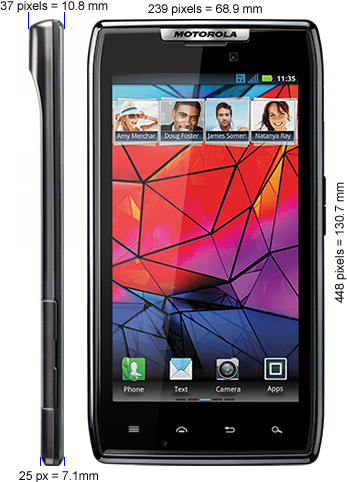 A 7.1 mm depth would have been very, very thin if that was the case. As a comparison, the popular Samsung Galaxy S II has a depth of 8.49mm. As you can see from the product images, the thickest part of the phone is on top where the camera are located. On the other side, other companies do the same. Sony Ericsson claims the Xperia Arc is only 8.7 mm thick but forget to menation that these measurements are done where the phone is at its thinnest. Motorola are most likely doing the same thing. As we often do when the specifications seems to be good to be true, we validate them by calculate the dimension based on the official product images. That is easy to do. If 239 pixels is the same as the width 68.9 mm and 448 pixel height is the same as the 130.7 mm height, our measurement of 37 and 25 pixels tells us that the smallest part is 7.1 mm thin and the thickest part is approximately 10.8 mm. In our opinion, it will be wrong to advertise the Motorola Razr as the worlds thinnest 4G LTE phone when for example the Samsung Galaxy S II LTE is thinner.

Wrong dimentions aside. Motorola are highlighting some of the nice features of the RAZR by mentioning a 1.2 GHz dual core processor, Corning Gorilla Glass, Kevlar Strong, Super AMOLED Advanced display, water-repellent nanocoating and a Smart Actions App which helps you save battery by changing phone settings during time intervals or based on current location. What's interesting with these specs are the Kevlar material used on the back cover and the nanocoating. The Motorola RAZR is "armed with Kevlar for extreme strength". Our guess is that Kevlar is used on the back side of the phone only. Kevlar is often used in places where extreme strength and low weight is required. It is 5 times stronger than steel on an equal weight basis. The nanocoating makes the RAZR water repellent and it even protect internal electronics against everyday spills. RAZR has not got an official IP code so we would not want to test the protection by pooring water over the phone.

Bonovox11 years, 1 month ago
Thats truly amazing specs for something that thin and only Motorola would pull it off!! I am not a fan of thin phones really but if this is as strong as they say then its all good!! The RAZR is back!!

hihihans11 years, 1 month ago
Just a galaxy with a lump

Well the one photo from the side view with the phone lying down reminds me of an Arc a little bit.

Dups!11 years, 1 month ago
Wow, just wow!
Everything about this phone is perfect!
Just yesterday I was talking about how my Motorola Razr V8 looks as good as new after more than three years and they come up with a phone built like this.
Definitely something I can buy.
Gorgeous and classy!!

Hobbs11 years, 1 month ago
Come upgrade time my head is going to spin with all these beautiful phones to choose from.I'm a fan of the RAZR brand.One of 130 000000 people that bought the first series.Yes this is just a RAZR by name and nothing more.But it has my attention.

Geezay11 years, 1 month ago
@ Hobbs Yeah, upgrade time will certainly cause a lot of headaches! Spoilt for choice we are.
This is a truly a spectacular looking device, at least on paper. If it gets the ICS upgrade, that would be so cool and yummy

Bonovox11 years, 1 month ago
I had the RAZR too it was amaing design but a boring phone but this is sonething else. How they fit so much inside that is beyond me

Bonovox11 years, 1 month ago
Not of they use the right tech inside. Companies like Nokia in the N8 use a special coating on the CPU to keep it cool. Would be quite difficult fitting a CPU fan inside this device

julias11 years, 1 month ago
I love the device but but would never want one because its Android.

On 2011-10-19 13:43:00, Bonovox wrote:
Not of they use the right tech inside. Companies like Nokia in the N8 use a special coating on the CPU to keep it cool. Would be quite difficult fitting a CPU fan inside this device


Yes, you're right! Motorola also uses a similar process, the Razr is having some coating inside.
This is really a phone I am more than likely to get, I don't use a phone camera much so those that are coming with 12mp cameras (yes, I am looking at you SE) next year will have to offer me something extraordinary cause right now this phone is at the top of my shopping list.

Bonovox11 years, 1 month ago
Nice!! I am not normally a thin phone fan but this is nice and as they say has super strong body unlike Arc

argiriano11 years, 1 month ago
I like DROID RAZR more than Galaxy Nexus... it is definitely on my next phone list, especially if

part their ways... just because I`m almost 100% sure Sony will disappoint me.

I hope I`m wrong but first my love of

and second - looking at Sony last couple of years in other departments I see no bright future, because they are slow in everything.
So the king is dead, long live the Googorola!

part their ways... just because I`m almost 100% sure Sony will disappoint me.

I hope I`m wrong but first my love of

and second - looking at Sony last couple of years in other departments I see no bright future, because they are slow in everything.
So the king is dead, long live the Googorola!

That is my sentiment exactly! I will wait for Sony to prove me wrong but for now this is officially my next phone. The fact that Google owns Moto has actually made me a little comfortable with them and hopeful that Moto will be better or as good as SE in software optimization.
The only thing that would stop me from getting this is a poor review from Gsmarena, I really hope it is a great review.

Hobbs11 years, 1 month ago
Holding thumbs for you Dups because I know how badly you want this phone.

Thanks Hobbs!
I want this phone badly.

Dups!11 years, 1 month ago
I just remembered one thing that could put me off this phone even after excellent reviews- the terrible Motoblur skin!
I hate that skin with a passion! For me, there are only two wonderful Android skins, ie, Sense and Timescape. I hope Moto hasn't included that rubbish on this perfect phone for my needs.
[ This Message was edited by: Dups! on 2011-10-21 10:42 ]

Dups!11 years, 1 month ago
Turns out this sexy beast has the useless and pathetic Motoblur.
I am probably going to regret it but I am getting it nontheless. I just love this phone for what it offers.
I am now waiting for Gsmarena to review it and hopefully it is as good as the specs suggest.

Bonovox11 years, 1 month ago
I had the Motorola Defy, from what I remember can't you turn off the Blur??

Dups!11 years, 1 month ago
No, unfortunately you can't. It is similar to the likes of SE and HTC, it is their 'differentiation' in Android. As I wrote, I find that HTC and SE make better use of the skins than the rest.
I suppose I will have to bear and grin it in the case of the Razr. There just isn't any phone like it at the moment, I place great importance in build quality and call quality and I know Moto will never disappoint me in those areas.
I also read a preview over at Techradar and it seems like a very good performer this Razr. So far, I am loving it and can't wait to get it.

Bonovox11 years, 1 month ago
Yes i am fussy about call quality too. Many years ago i was given Star Letter about it in What Mobile and it won me a w595. Anyway i an sure they have improved it in this device and with better processor too it should not slow you down
Hands on
www.gsmarena.com/motorola_razr-review-667.php

Lollylost10011 years, 1 month ago
Yes, but it's 10.8mm at it's thickest point. Saying it's 7.1mm is like measuring the wheelbase of a car from the start of the front wheel and the end of the rear wheel (whereas the wheelbase is from the centre of both).

Cool bro. If you want to think that way, go ahead.

martinezx11 years, 1 month ago
No Xenon flash, No Qwerty Keyb, No normal call buttons... Not for me