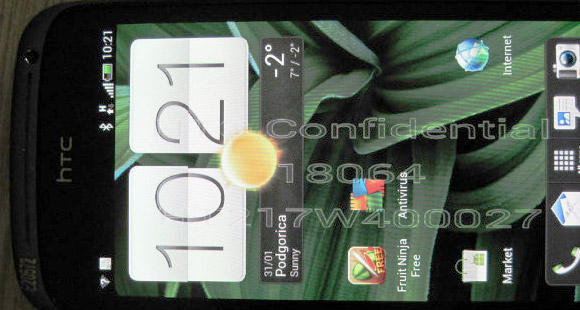 The HTC Ville is expected to be announced during Mobile World Congress in the end of this month and the Ville is expected to be one of HTC's flagship models. The Ville is rumoured to have a 4.3 inch AMOLED display, 8 megapixel main camera and a 3 megapixel front camera. We have seen a video recording of this model before which exposed detailed information about the unannounced device. This time, the leaker has shut down the low resolution video camera phone and instead captured some still images with higher resolution to look at.

In line with most flagship smartphones available these days, the Ville ships with a 1.5 dual core processor. It will also be running on Android 4.0 Ice Cream Sandwich. Further unconfirmed specs are 1 GB RAM, Full 1080p HD video capture and HTC Sense version 4.0. The 8 megapixel camera has auto focus and as you can see on one of the pictures this is assisted by a LED light