Until now, the only way to browse the 32.000+ apps available in the Windows Phone Marketplace has been to buy a Windows Phone and view them on the device. A couple of third party web sites has made web interface to the store but there has been no official solution from Microsoft. Until now.

The Windows Phone Marketplace are divided into two sections named Apps and Games. Apps has Free, Top, New and Featured sections and these again are categorized into 16 categories. Spanning from lifestyle, sports, education to entertainment and social. The Games section has mostly the same structure but there is also a Xbox Live section where games found are connected to Xbox Live where for example game achievements during gameplay are updated online.

In contrast to a well know larger app store, Microsoft has made it easy to install apps to a Windows Phone device even without the device or special PC software. There are three different ways to install apps on your Windows Phone. Install using the Zune PC application, directly from the mobile phone or from the Windows Phone Marketplace web site. Similar to Android Market, installing apps from the web site requires not much more than a click on a link. To have apps installed automatically on a Windows Phone 7 device the setting "Find My Phone" must be set to "Connect to these features faster" must be selected on the phone. 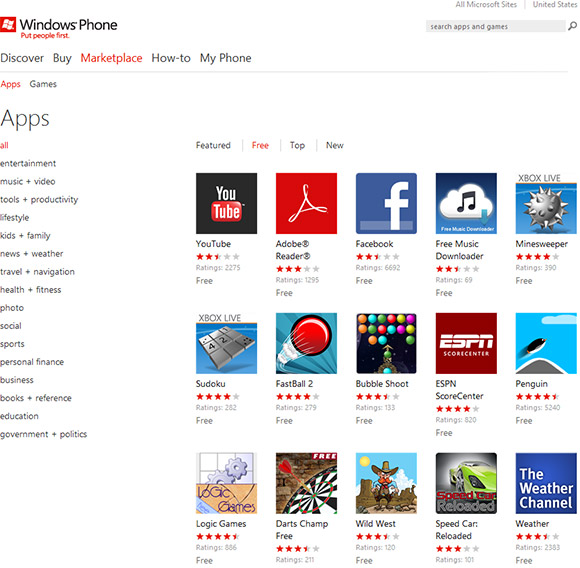 julias9 years, 4 months ago
Great stuff Windows Phone is finally in line with the Apple App Store and Android Market

julias9 years, 4 months ago
Just had a proper look at the Windows Phone Marketplace. Sorry Android fans but they have got this to down to a T! This is beyond epic.