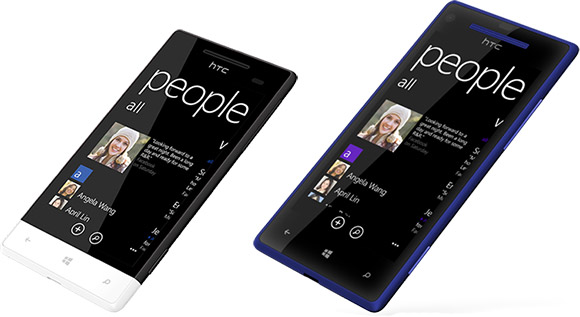 Before the Android OS entered the market, HTC used to be a manufacture shipping smartphones running only Windows operating system from Microsoft. Lately it's mostly been Android handsets coming from the Taiwanese company. But today HTC announced the Windows Phone 8S 4-inch smartphone and Windows Phone 8X 4.3-inch high-end model. Even though Nokia has announced both the two Windows Phone 8 models Lumia 820 and Lumia 920, HTC said in a press release today that the HTC Windows Phone 8S and 8X are the first signature Windows Phones.

Most smartphones released today are available in black/grey or white. Nokia think consumers want more colours and both Lumia models are available in several very saturated colours. HTC obviously think the same as the Windows Phone 8X and 8S has similar colour variants as those in Nokia's collection. The Finns have of course noticed this and Chris Weber over at Nokia tweeted that It takes more than matching colour to match the innovation of the Lumia 920. We should be grateful that it is impossible to take patent on phone colours. Both the Nokia handsets and HTC smartphones will stand out from the black and whites. HTC believe that colours are such an integral part of the Windows Phone 8 experience and the vivid colours surely matches those Windows 8 tile colours. 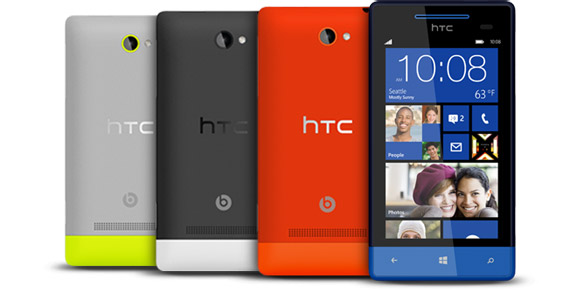 The 4 inch Windows Phone 8S is the least expensive of the two phones with a 1 GHz dual-core Snapdragon processor. It has a distinctive uni-body construction which should fit comfortably in the hand. Further, the Windows Phone 8S has a 5 megapixel camera, HD video capture, 4-inch Super LCD touch screen, 480 x 800 pixel resolution with Gorilla Glass and Beats Audio.

Windows Phone 8X is obviously HTC's Windows Phone 8 flagship model for the next months. It is a 4.3-inch model with a 720 x 1280 HD display, Full HD 1080p video capture using both the main and front camera. The main camera is powered by same HTC ImageChip we find in the HTC One X Android smartphone. Except for the smaller screen, the Windows Phone 8X model share many of One X features, such as a 8 megapixel camera with BSI sensor and f/2.0 aperture. HTC Windows Phone 8X has one of the most powerful front cameras we have seen so far. It has a 2.1 megapixel resolution and it can record video clips in 1080p Full HD resolution. It also has a 88 degree wide-angle lens which means it will capture a wider area than most if not all smartphones available in stores today. The 8X is powered by a 1.5 GHz dual-core S4 processor with a Adreno 225 GPU from Qualcomm. One of the fastest available. Neither of the two phones has support for 4G networks which will be a turn off for some.

CEO Peter Chou has not taken HTC to a new direction completely away from Android, but he praises the Windows Phone 8 platform by saying Windows Phone has clearly emerged as one of the top mobile ecosystems and is competitive against any other smartphone platform in the world.

Guarulhos9 years, 4 months ago
Nokia Is Less Than Impressed With The HTC WP8 Event, Not Afraid To Say It !!!

ILoveBhe9 years, 4 months ago
I see a very strong Lumia design influence with the blue one.
I think I love the blue one but the black/white thing sucks big time
[ This Message was edited by: ILoveBhe on 2012-09-20 03:08 ]