One thing we know for sure is that Samsung soon will announce the Galaxy S III smartphone, and that the date for this announcement is getting closer every day. What we do not know for sure is the device specifications and what it will look like. Most people though Samsung would announce the Galaxy S III during Mobile World Congress, but for unknown reasons, the Korean company did not do that this year.

A new image supposedly of the Galaxy S III has found its way to the world-wide web. It seems to be a photo of a Galaxy S III where the date 22 May 2012 is set as a calendar event on the device display. The photo has the logo of Weber Shandwick PR agency which has done promotions for Samsung Mobile in the past. The latest says the Galaxy S III will be available in June, so an announcement in May is not unlikely.

The exact text on the calendar event in May is "Watch a Live Broadcast of the GALAXY S III Unpacked Event".

We can see that it has a front facing camera, single home key, stereo speakers where one is clearly visible below the home key and the other are located above the Samsung logo. It also seems like the Galaxy S III will have a dedicated camera shutter key.

What do you think? Is this the real deal, and does this look like something Samsung could have made? 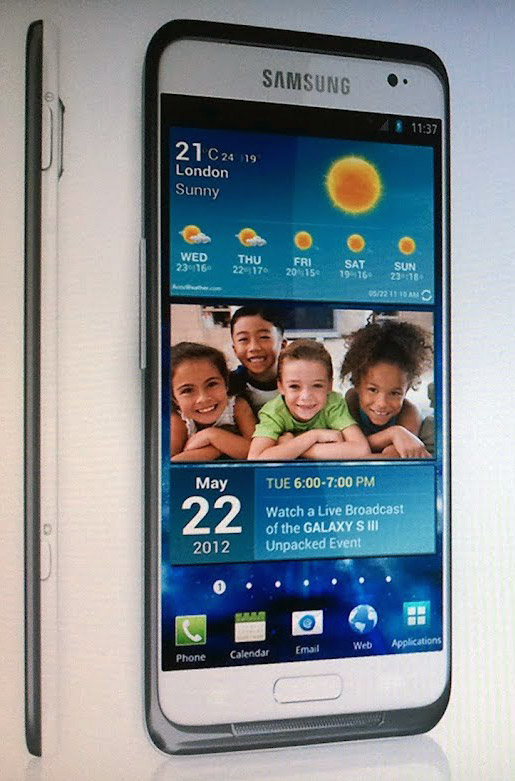 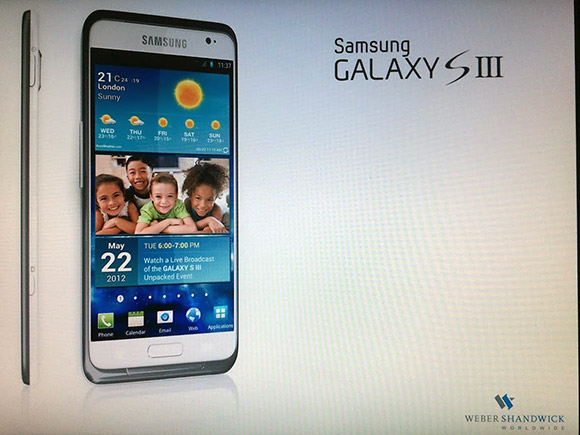 ok19078 years, 3 months ago
Murtazin said that this is fake but nonetheless, the closest design to the real one.

skblakee8 years, 3 months ago
There is no wow factor in this design. Nonetheless if this is it I just might get once the screen resolution is upped to HD form which it should be.

Miss UK8 years, 3 months ago
Doesn't look like a bad design overall
Hopefully the OS is better to

etaab8 years, 3 months ago
Its so obviously fake its trying too hard to make it concrete what day it will be announced, the 22nd of May etc. The fact the faker went to such intricate detail as to even put the last update of the accuweather app to the 22/05 at 10am. If this was genuine, Samsung or any other manufacturer would make their latest flagship a little more mysterious.

Miss UK8 years, 3 months ago
Lol true ^^
There's to many fanboys though
And them posting this stuff up makes
Them think there Kewl
Who they trying to kid!
Just wait for the Manufacturers to
Unveil the product instead of photoshopping
Utter rubbish

etaab8 years, 3 months ago
Besides the fact its simply a white S2 thats had more casing added to it. I dont think for a second Samsung would add a dedicated shutter key either.
Roll on the announcement though, as at the moment its a toss up between this mystery phone and the HTC One X.

Miss UK8 years, 3 months ago
Whichever one you go for etaab
Try it before you buy, there's nothing
More then buying something getting it and
Disliking it afterwards

etaab8 years, 3 months ago
Im pretty easily pleased when it comes to phones. Theres only really one phone i was disappointed with and that was the Satio. The camera never seemed that great at the start and the software was poorly supported by SE.
But then thats the beauty of Android is that its so much more customisable from the off. Ive used Sense and Touchwhiz a hell of a lot so neither would disappoint me.

Miss UK8 years, 3 months ago
I've never had any diss appointment in past Android cameras
Either the HTCs do have iffy battery life but the extended battery's
Do boost them better