The UK edition of the HTC Facebook page posted a short message on the Facebook wall today inviting Facebook followers to an upcoming event see what HTC has to offer next. In September last year, HTC held a similar event where they announced HTC Desire HD, HTC Desire Z in addition to a new HTC Sense experience.

We have several possible names on the block for new devices wd can expect to see. Such as HTC Bliss first appearing on a Verizon road map not long ago. HTC Puccini / Jetstream is a 10.1 inch dual core tablet, a HTC Ruby dual core 1.5 GHz Snapdragon smartphone with 4.3 inch display and 1GB RAM. And finally the EVO Design 4G, a 4 inch smartphone with 1.2 GHz singe core processor.

The HTC model names are just rumors of course, but the upcoming event is not. If you are in London on September 1st, make sure you find the way to TBC in central London for a few phone treats. 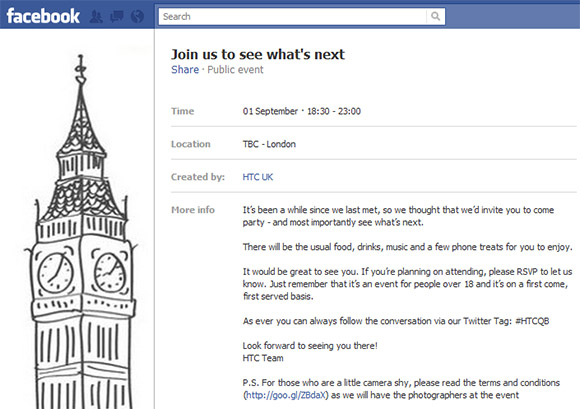 The cost of iPhone 4 hardware components

New Samsung Desire could be announced on September 1st

titus111 years, 3 months ago
Would they be announcing a new WP7 (Mango)phone?

goldenface11 years, 3 months ago
At least eight new phones coming before the end of the year as well as the possibility of a whole new HTC OS incase things with Microsoft and Google don't work out. source