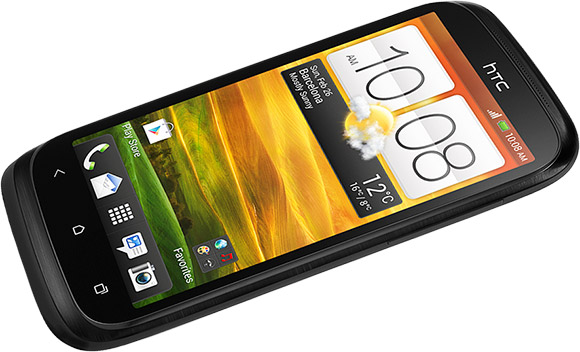 This week HTC announced the Desire X at the IFA show in Berlin, Germany. Desire X is an affordable Android smartphone with a 4-inch display, 5 megapixel camera and a 1GHz dual-core S4 Snapdragon processor from Qualcomm. The 480 x 800 pixel resolution is the norm on a 4 inch display these days. The MSM8225 chipset from Qualcomm has the slowest processor in the Snapdragon S4 series, but the lower clock speed could result in less strain on the battery.

Some of the things we noticed about the Desire X is the unbelievable battery capacity. The HTC specification sheet is listing a 1650 mAh battery and it claims that this 4 inch smartphone will last for 750 hours in standby and that you can talk for 1200 minutes. That is 31 days standby and 20 hours talk time. We doubt these numbers are correct on this average batter, but if they are, it's just below the Motorola Droid Razr Maxx which has a 3300 mAh battery.

The other thing special about HTC Desire X is the HTC ImageChip which enables VideoPic: Shoot video and capture pictures at the same time. The 5 megapixel camera has a BSI sensor, f2.0 aperture and a 28 mm lens (35mm equivalent focal length). HTC Desire X has a feature called Smart Flash which will adjust flash level automatically set by distance to subject.

HTC's deal with Dropbox will give Desire X owners 25 GB of storage free for two years.

Nokia Lumia 920 could be first Windows Phone with PureView camera

Bonovox8 years, 6 months ago
Nice affordable dual core but HTC have not released many high ends this year except two. I like the white version of this