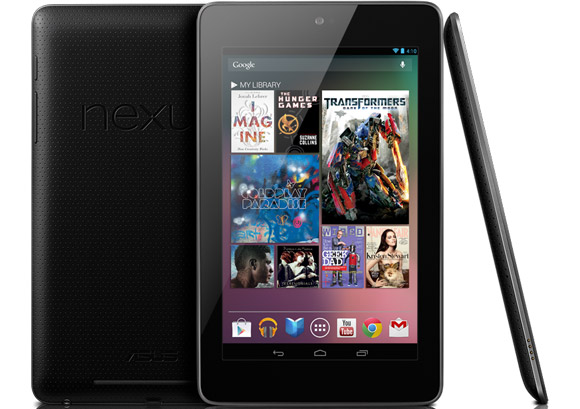 At the Google I/O conference this week, Google announced the Google Nexus 7 tablet with a 7 inch HD IPS display. Google will be offering the Nexus 7 tablet for only $199 without an operator contract so the tablet is obviously sponsored by Google.

Despite the low price, the 7 inch tablet is well equipped with a 800 x 1280 pixels HD IPS touch display with a scratch-resistant Corning glass. Nexus 7 has a quad-core Tegra 3 processor from Nvidia, 8 or 16 GB internal storage and 1 GB of RAM. The powerful 4325 mAh battery will let you browse for up to 10 hours or watch videos for 8 hours.

Google has not manufacture any of its older Nexus devices and neither the Nexus 7 which this time is made by Asus. The hardware specifications are very good for a $199 tablet, but Google is a service company and it want to highlight all the Google services included with the device. Some of the content available for the Nexus 7 are 600 000 apps and games, magazines, over 4 million ebooks and music.

HTC to withdraw its operations from Brazil

djin10 years, 7 months ago
The only reason this would sell well is because of free content and low price. I feel Microsoft did much better job this year , with windows 8 tablet and surface. I find it hard to even consider this.

razec10 years, 7 months ago
Surface might even flop just as Intel's ultrabook did, all because of price. History told us that nothing beats a product with an excellent balance of price and performance. netbooks became a hit 5 years ago because of price, android became so widely popular because of mainstream devices powering it, mainstream cars are the most numerous because they have mainstream price-tag. in mobile phones remember how K750 became the hottest selling cameraphone circa 2005 even if there were many high end smartphones that beats it in specs hands down. perhaps some would argue it had the best camera in its time but people outside the technopile sites like this don't know such fact at all.
[ This Message was edited by: razec on 2012-06-28 16:34 ]

Geezay10 years, 7 months ago
I think this will sell well because of the price and specs combination. It being a Nexus device makes it easy to unlock the bootloader as well. I see larger versions of this being built as Google settles in the tablet landscape.

Bonovox10 years, 7 months ago
Well it is fast and fluid with a decent price too. See this video

carkitter10 years, 7 months ago
Not bad; it's the only Android tablet I'd seriously consider at present.

goldenface10 years, 7 months ago
It's the first one I'm even considering purchasing and the main reason is the price, secondly it looks pretty good.

etaab10 years, 7 months ago
Is it just me, or is the bezel around the screen much thicker than on other Android tablets. Which to me makes it look a bit.. budget..

Bonovox10 years, 7 months ago
Yes the bezel is rather large. But specs are good for price. Most Android tablets so far have been laggy. But this seems good

pt02010 years, 4 months ago
Today they started to sale the Nexus 7 in the Netherlands ...
Very nice tablet ...
Was busy all afternoon with it and it works good and looks even better than on video/pictures ... but there is one thing I really miss... Adobe Flash player,it is still to early to go without it,will have to find a way to instal it.

rikken10 years, 2 months ago
Got one today. Great build and a joy to use

@Rikken,why do you need a tablet when you got the Note 2??

rikken10 years, 2 months ago
Because I am crazy

Updating to 4.2 that very moment, it's a beautiful thing. Too bad the true tablet apps are so scarce...