Hints of the European launch emerged yesterday when Bill Condie of the London Evening Standard tipped Vodafone to be the official carrier, which will be confirmed Monday. But Voda is just part of the picture, with Apple going for a three-pronged European strategy with carriers - again, responding to disappointment in America with the exclusive deal with AT&T/Cingular.

This news will certainly put a smile on European Apple fan's faces even as Americans are queuing in the rain for the now-inferior 2G version. 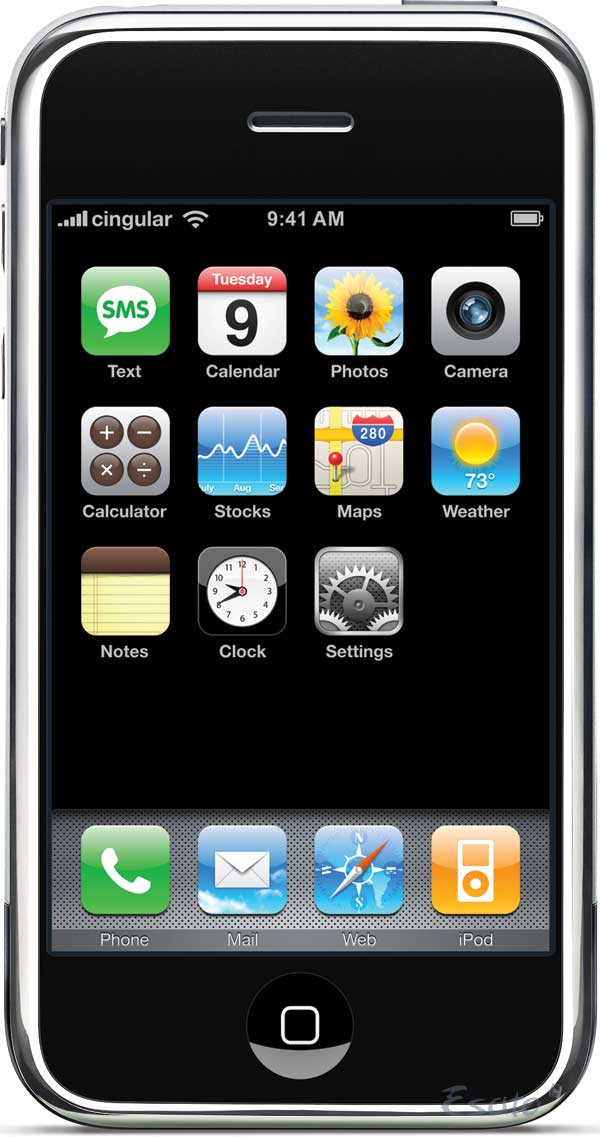 Queen to get Blackberry

iOS bug will give unauthorized users access to iPhone

Comments
On 4 Jul 16:55 Bhav wrote
I would only buy the Iphone if it had 3G and HSDPA support. It is far to expensive not to have them, and I would much rather wait for a K850i if the Iphone doesnt have them.
On 3 Jul 20:02 wtf wrote
Well surprise surprise.. Monday has come and gone and this story has faded away.

It's not about what the iPhone does.. despite what SJ will tell you.. it's the way it does it. Yes, phones have been able to play music, and read emails, and the rest for a while now, but none have done it with anywhere near as much style.

The fact remains though that the once you get past the novelty offered by the U-eye candy (do you like what I did there? ;-p ).. the iPhone is lacking in several features, and will leave many people frustrated, unless these issues are resolved in future updates.

The iPod doesn't really do anything other MP3 players on the market can't do.. in fact in many cases it does less. BUT.. no one can argue with the fact that it has completely changed the way people think about their music collections, and its image has become an iconic feature of modern day consumer/portable electronics. The iPhone will no doubt do something similar to the mobile phone market.. and certain future releases by all other manufacturers will no doubt be referred to as 'iPhone-killers'.. maybe even solely based on the fact that they have a touch screen.

All of this is inevitable. No, the iPhone is nowhere near a perfect device, and yes there are certain things we all wish Apple had implemented, but I can assure you that the likes of Nokia and SE.. or whoever are all taking a look at themselves and thinking "Shit.. what now?"... right from R&D to marketing, because Apple have laid down a pretty hefty gauntlet.

[/discussion]
On 3 Jul 14:13 thedumbamerican wrote
And a few more things:
- It's worth posting here because iPhone (is)(was)(will be)the passage between "Neolithic" and modern times.You don't meet every day such event...
- The meaning for existing of many manufacturers becomes a big question sign.
- The "dictatorship" of "clam-shell" phones should come to an end.(this is my personal opinion and you don't have to agree with that)
- For those who claim that iPhone is not "so"revolutionary, because the technology that uses was "long time before invented"... WERE? WHEN? WHO? And at WHAT PRICE?...

On 3 Jul 12:57 Chris wrote
Mac = innovation ? hahahaha nice one
On 3 Jul 09:16 duh wrote
apple is the only company that successfully compiled in one device all the features that you see in the iphone seamlessly. no other phone company did that not even sonyericsson. thats why they will surely copy the iphone. if SE came out with the ipone i now that you SE fanatics would sing praises for it right away. heck it's apple corp. w/c is way better tha SE anyways that did it. look at the ipod, because of that portable media players became popular.

the UI and software is fast with no lag. sorry to say for any SE software which has more bugs and leaving phone owners out in the rain for they stopped firmware upgrades to some of their phones. good move SE huh?

i have fiddled around with the iphone a while ago and it did not even freeze up or boot up on me. sorry to say for all the SE phones they froze & rebooted even though i only touched them the first time.

the UI of the iphone is solid for its a MAC operating system and we all know apple makes way better products than SE. ericsson has to ask the japs help to make their products good. pathetic!

its a good thing i have the w850i and the phones that SE will no longer
On 3 Jul 03:51 thedumbamerican wrote
Ha! that mean that no other manufacturer will "invent" in the next 3-5 months another touch screen, am I right?They will keep doing what they did until iPhone hit the market, right?I don't want to bring the iPod in discussion, but you should be thankful to Apple.Inc for raising the stakes....
On 2 Jul 22:56 atilathehunch wrote
to whoever wrote about rival firms copying the iphone, wake up! touch screen? has that been done before? oh. look im sure you have a vast knowledge of apple, but nearly every new piece of technology is an improvement or development of another existing one (as is apple's iphone). other companies have to be competitive to survive and if not we would be living in caves banging rocks together! i can see that you can read the brocure,its good, but its not breakthrough technology. I have manufacturer preferences too, but that aside, evolution or "copying" is enevitable
On 2 Jul 22:54 THEDUMBAMERICAN wrote
For Many Years I craved for "euro" mobile phones,...once iPhone hit the market...not anymore...
On 2 Jul 13:42 meesha64Russia wrote
Cool phone...
On 2 Jul 08:41 bamsarifianto wrote
it looks pretty. apple products always look good imo but they are too expensive for me :-[. i want a k850 too!
On 1 Jul 23:31 youallsuckhaters wrote
to all the se & nokia fanatics out there... those phone companies will copy the iphone in these coming months thats for sure. the iphone is only the 1st of apple's innovative products to be released. wait till they bring out the iphone 2 w/c will surely knock se or nokia's brick & cheaply made phones out of the mobile world. se & nokia could not even come to parr with the iphones very fast menu interace, hell no phone manufacturer could even mach it's fast & flawless menu navigation. my sonyericsson phone really sucks at it. bottom line: SE & nokia etc will surely bring out copies of the iphone period!
On 1 Jul 17:51 thedumbamerican wrote
Yeah! that's right... SonyEricsson is better than iPhone, and got 3G too...Don't buy "The iPhone", there's a lot of Samsungs, Nokias, BenQs way better than the humble iPhone...and is not even make from plastic, what a waste....without FM radio is purely crap, and they have the nerve to call "that" a Phone... They shameless copy SE bleeding edge technology, and software too! Why so much fuzz around this iPhone?...
On 30 Jun 13:39 Waka wrote
I'm surprised you've put this complete load of rubbish on your front page as 'news'. It is very obviously wrong.

The iphone will need a complete redesign of radio and camera and the hardwired battery will last about 5 minutes in a 3G phone!

Do us all a favour and don't put obvious rubbish on your front page.

W.
On 30 Jun 11:56 gatesbill wrote
... lies and speculations!
On 30 Jun 11:34 santo911 wrote
I-phone will be good if only it will be sold at 350euros. cause its features worth that much, or even 300 euros....
On 30 Jun 11:09 nel wrote
I phone is unique i like it. But i dont think it will match my se. Better in every aspect. But ya may be i will buy i phone its different.
On 30 Jun 05:34 Sloopjohnb wrote
It would be cool if apple sold the iphone unlocked at cpwh
On 30 Jun 01:25 JF wrote
Apple just launched the most amazing piece of communnication ever...oooops, are we already in 2007? I thought we were in 2004...sorry.
On 29 Jun 23:55 james wrote
The iPhone looks amazing and offers a UI which many Phonemakers will introduce later. However people who are really looking for a great phone with state of the art features will never buy this phone. It is something SE and Nokia offered two years ago. This is my humble opinion.
On 29 Jun 19:55 susan wrote
apple is wory about sonyericsson w960 that is much better than ipod and sony was the fist with music electronics so that makes sonyericsson more strong with ericsson comunication and sony music electronics
On 29 Jun 19:20 EricsSon wrote
This is pure bullshit.
On 29 Jun 17:04 Superluminova wrote
Ah now this is great new, vodafone to get the uk exclusive on this baby, A nice free staff tariff with an iPhone shall be mines!
On 29 Jun 16:59 by wrote
where is the camera for video call?
On 29 Jun 16:40 david wrote
I have to agree with "wtf" :) I think it would be a pretty stupid to lunch a 3G versio so soon in eurpoe it would kill the sales of the old one in us not to mention piss allot of americans of. This has to be bs or a stupid move by apple maby early next year they will give us a 3G version. But who cares any way K850 W960 rule iphone is crap
On 29 Jun 16:13 Whocares wrote
Who cares the iPhone is for LAMERS!
On 29 Jun 15:27 wtf wrote
This is BS.. how can you say this is from breaking news reports? It's called specculation. There's a difference.

You honestly think Apple would shoot themselves in the foot by coming out with this on Monday? Apple has more customers in the US than the whole of the rest of the world put together. I can see Steve Jobs saying it now..

"Yeah.. I'm pretty excited about this. A phone.. an iPod.. and an Internet device.. Oh, and it's got 3G too! So I'd like to take this opportunity to say "You got owned", to all those dumb Americans out there that queued up for hours, paid $600 and signed up for a 2 year contract."
On 29 Jun 13:57 wrote
It says of Germany not only in Germany... good grief
On 29 Jun 13:25 vincebio wrote
t-mobile for germany only? vodafone for euroland including uk?