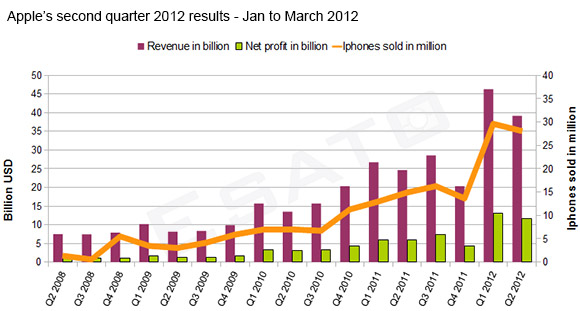 Apple is increasing the lead as the worlds most profitable mobile phone manufacturer. During the three first months in 2012, Apple sold impressive 35 million Iphones. As we can see from the chart above, number of sold Iphones was doubled in fiscal Q1 (Oct, Nov, Dec 2011) when the Iphone 4S was announced and released.

In after-hours trading, the Apple share rose 7.7% after the release of the quarterly results, and an Apple share is now being sold for $603 which is lower than the all-time-high $643 per share from earlier this month.

nicv2710 years, 9 months ago
Considering the queue in the apple store in Bluewater, Kent on Monday a few have gone back...

tranced10 years, 9 months ago
For repair?

Miss UK10 years, 9 months ago
I was in the apple store in Birmingham on
Monday they were very busy I couldn't get any
Assistance so I went on a iPad and booked a Staff member
To come over lol and within mins I got assistance pretty
Awesome way to get help

Btw seems quite a lot sold by big boys at apple
Well Done ur a great brand I adore my iPhone
A lot !!!

makulet10 years, 9 months ago
Too much hype, still an overpriced gadget.

Miss UK10 years, 9 months ago
I actually don't think there overpriced its just that countries like EU
wack aload of VAT on if you went to USA there alot cheaper to buy there the,
64GB iPhone is Approx £200 cheaper to buy then say then the UK which tops of at £699
I guess everyone has there virtues when it come to Apple though

It's probably because you, as a consumer, are protected by laws that requires Apple to do repairs to the phone if anything goes wrong because of a manufacture fault.
In the US, I think they have a 1-year warranty where Apple guarantees that the Iphone will be free from defects.
I believe that most European consumers can repair the Iphone for free within 2 years if it is the Iphone breaks down. Apple is of course charging for this service by increasing the price of the phone.
Here in Norway, the seller of an electronic product which are meant to last longer than 5 years (such as a mobile phone) must repair the device for free if it is broken and the damage not was caused by the owner. The store, and not the customer, will have to prove that the customer was responsible for the damage if the store want's to avoid the warranty rules. I think you have something similar in the UK. The retailer must proof that the product was misused by the buyer for six months, and after 6 months the burden of proof switches to the buyer.
And of course the added VAT can explain some of the price difference. US 0-13%, UK 20% and Norway 25%.
[ This Message was edited by: laffen on 2012-04-27 01:43 ]

Miss UK10 years, 9 months ago
In the US I think there phone is covered
For 12 months plus 90 days like UK
But looking at the AppleCare+ plan it's
Slightly better then the Europe one!
The VAT for the US is incredibley low
So I guess Europe is abit of a Rip Off
Just like Rip Off Britain is at the present!
I know that food prices are lower here
In the UK compared to the US I guess
I'd rather eat then worry about fancy
Phones lol