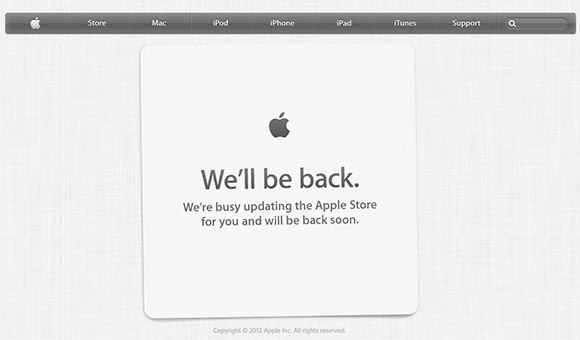 Apple has again chosen to shut down its website while we wait for the Iphone 5 announcement which are excepted to be revealed this evening. We have always wondered why Apple need to close the store because one or two new products are added. We are talking 2012 and thought the web technology had evolved for this to be possible. It is the most valuable company in the world and it is strange that they not has a solution to update a web site at a given point in time. On the other hand, Apple is very good at keeping things secret until it is official announced by the CEO of the company. And this is Apples way of preventing leaks from happen.

Tim Cook will most likely announce an Iphone 5 with a larger screen. Maybe 4 inch. The latest rumours are that the screen width will be kept identical to the Iphone 4 but the height will be stretched. The exterior will be similar to the existing Iphone 4S with minor changes to the camera placement and microphone. Iphone 5 will most likely be a little thinner than the 9.3 thick Iphone 4S. The Iphone 5 are rumoured to have a smaller dock connector which will require an adaptor for those owning on older accessories. The Iphone 5 could also be the first smartphone with the smaller Nano-SIM card.

What we not will see is a slot for expandable memory. That would kill the concept of selling 16GB internal storage for $100. You probably know that microSD cards now are available for less than $5. Lucky Android and Windows Phone owners can therefore buy 320 GB additional memory for the same price as the difference between an Iphone 16GB and 32GB. We will not get the universal accepted USB port because Apple are making a lot of money on proprietary accessories. Neither will we see a user-replaceable battery. Having non-replaceable battery means that it is possible to design smaller, thinner devices.

And the name. Maybe it's called Iphone 5, but we should not be surprised if the new model is called The new Iphone which is a naming convention Apple used for The New Ipad

Miss UK10 years, 5 months ago
Thats no good I wanted to see how much the new headphones were from this new iPhone 5

Miss UK10 years, 4 months ago
StOre is up in running now
Like all the new improved iPods but not that Apple Lumnia one

JiggyJaggy10 years, 4 months ago
Wow I just tried to pre-order one and already there is a 2 week dispatch time. Didnt get a look in!

Miss UK10 years, 4 months ago
You will get one on contract though
But will have to pay twice more then
That's the mistake I made with my 4S
Wish I just waited and bought it sim free
Online in the post instead of trying to reserve
At the apple store which is a blooming joke
The site cannot handle to much traffic and is so slow
If u go on site at 9pm try n reserve have a lot
Of patience

JiggyJaggy10 years, 4 months ago
Does the pre-order not just mean you are ordering one sim free though? I will just cut my sim down to a nano sim the same way when I went from iPhone 3G -> iPhone4.

Miss UK10 years, 4 months ago
The apple store handsets are unlocked its just the ones that are obtainable via the networks
that are locked to the networks!
sheesh I just checked my Emails and ive recieved about 5 messages about pre-ordering this new iP5 lol
the contracts don't look to bad from Orange via 4G tariffs

bring it on next year

Marly10 years, 4 months ago
@JiggyJaggy:
Have read on Twitter that the nano-sim is thinner, which is why it wouldn't be possible to cut an existing sim, so you'd need a new one.
Dunno if this is true, never seen a nano-sim IRL yet.