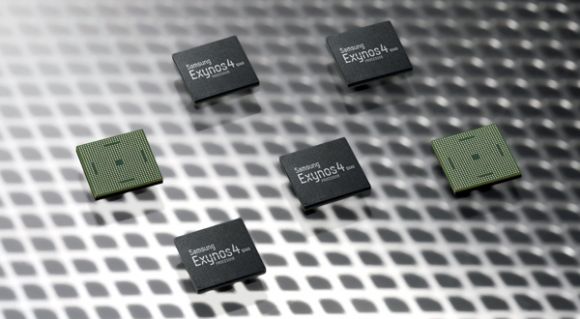 The Exynos 4 Quad will consume 20% less power than the its predecessor 45nm Exynos 4 Dual. The new Exynos has only four cores unlike the Nvidia with its 4-PLUS-1 core processor design where the fifth power saving core is clocked lower than the four main cores. But the Exynos 4 Quad adds of-off switching for each core in addition to per-core dynamic voltage and frequency scaling.

In our view, the first thing most users will notice and appreciate with a quad-core processor is the lower power consumption. Samsung says that the Exynos 4 Quad is particularly suited for apps such as 3D games and video editing. If you don't frequently run such apps or need that extra battery time, there is currently not much need for a quad-core CPU.

Apple sold over 35 million Iphones during the first quarter 2012

Supa_Fly9 years ago
Very interesting advances in Technology but it's now beginning to show not just in PC's (Desktops, laptops, and more alarmingly the Ultrabooks) ... where the performance is weakest and slowest to advance:
RAM!!
> Lack in performanced:
- significant (30%+) speed increases (desktops & laptops seem to be ok due to Core architecture support, but the real hurt is in size & reduced latency).
- increased size for more applications and processes to run right at the kernel.
^ size of RAM along with currently announced CPU & known upcoming cpu's is what restricks a tablet from a true code developers novelty.

Hobbs9 years ago
Looking forward to seeing this phone in action when it finally decides to come out and play.

skblakee9 years ago
I hope Sammie don't disappoint with the SG3, not that I think they will, because I want this to be my next phone. I am going to break my habit and buy two feature phones in less than one year.
If the current smoothness in the SG2 is any indication then this current processor should be even better.

etaab9 years ago
To be honest ive a feeling even though the S3 will be the most powerful handset on the market, i think it'll be duller than the HTC One X. I cannot imagine Touchwhiz besting the latest version of HTC Sense.
I think HTC will pip this years flagship race on user experience.

Bonovox9 years ago
Yes,after I seen the HTC One X i must admit the screen looked more stunning than the Super AMOLED Plus & Sense is always the best looking

Tsepz_GP9 years ago
Cant wait for this to finaly be announced, Samsung always seem to learn their lesson from past flagships thats why the GS2 was so amazing, in the 1st GS they through in a bad NAND chip which caused tremendous lag in some GS models, no flash in Camera and were slow with updates.
Most of that was fixed in GS2, its UI speed and smoothness became the benchmark in Android, they gave it a great camera with flash, and managed to be among the 1st to update their flagship to a new Android version.

etaab9 years ago
@ Bonovox - when i first picked up the HTC One X i was disappointed with its actual screen quality though. It didnt seem anywhere near as bright as the Galaxy S2's and seemed rather dull with much lower colour contrast.
I tried playing around with the settings but nothing worked. It even looked dull compared to my N8's lower quality Amoled.

Bonovox9 years ago
I found it excellent. Colours were great on one I seen. It was certainly the best HTC screen yet

etaab9 years ago
I dont doubt that, but i dont think any LCD can compete with Amoled screens or at least not on any phones ive seen.

skblakee9 years ago
Yes and from what I read recently Samsung might have found a way to take away the only advantage that LCD's had over AMOLED's, the white colors. Amoled's burning up more energy rendering white colors than LCD's do and so with most web pages AMOLED's would use more energy than LCD's. However it has been speculated that in the upcoming SGS3 the new screen not only will have a much higher resolution but would have over come that white rendering disadvantage.
If this is true then LCD's will be playing catch up for a while.
AMOLED's are simply more beautiful.

etaab9 years ago
Im just dreading the same problem i have everytime i buy a new device - DEAD PIXELS, im so looking forward to having a 720 pixel wide screen that if it comes with even a single dead pixel i'll be returning it quicker than i bought it.

rikken9 years ago
And this tread was suppose to be about : Quad-core Samsung Exynos 4 processor ready for Galaxy S3

serge3279 years ago
Galaxy s3 seemdidnt surprise us with Exynos 4 Quad Core,because i see the newz about the China Brand name MEIZU already use the Samsung Exynos 4 Quad Core CPU... and the resolution is QHD in 4 inch... i think performance will be better than Galaxy S3 if both use same CPU.. because Galaxy S3 use high resolution Screen, meant GPU meant need handle more source than MEIZU....

Supa_Fly9 years ago
this cpu will be based on A9 or A15x?

Bonovox9 years ago
I hope Samsung come up with a new exciting design. That for me is their downfall their designs are dull. But their specs and software the best

etaab9 years ago
Ive started a new thread now that the phone has been announced - HERE.

On 2012-05-03 10:33:00, Bonovox wrote:
I hope Samsung come up with a new exciting design. That for me is their downfall their designs are dull. But their specs and software the best

I TOTALLY AGREE. All the phone manufacturers have done is do a rehash of the iPhone 3 design (which I never liked to begin with)... So far, only Sony and Lumigon have departed from the rounded-corner fad that the iPhone started.

rikken9 years ago
The rounded shape makes the phone more comfortable to hold, that is not the case with the X S which is too square and uncomfortable imo

Bonovox9 years ago
The design is defo nicer than the square GS2. But does not have the wow factor to me still

etaab9 years ago
Thats exactly my point.
When i used an Xperia S for the first time a little earier this year i was a little, only a little mind, wowed with the screen. It was very nice and made Android look pretty even with Sony's poor grey icons. It was the actual feel of the phone i hated.
Hopefully the S3 will have both, which i think it will. Personally i'd have preferred it to look more matt rather than glossy however.
@ jplacson - this is the arguement ive had with many iPhone owners in the past including dear old Masseur when he was here. People are under the impression Apple created the whole idea, shape, design of the full faced touchscreen device. They didnt, they didnt even use it first. Having a full face touchscreen leaves little in the way of design differences between devices and manufacturers.