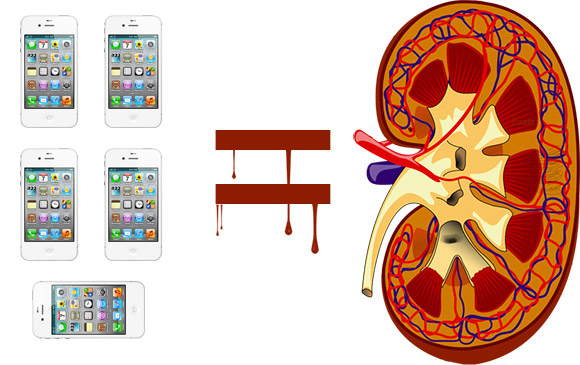 I does not get more tabloid than this. The Chinese newspaper Xinhuanet reported that a Chinese kid sold one of his kidneys to finance an Iphone and an Ipad. As in the rest of the world, Iphone and Ipad are popular products in China and very few can afford one. Wang, a 17-year-old high school student learned how to get hold of these Apple products without money. Wang meet one of the main suspects through an online chat room and the deal was done.

Five people face charges for illegal trading of a kidney. The main suspect had built up some gaming debts and knew he would earn a lot through illegal kidney trading. He earned 35.000 USD while the poor teenager with only one kidney left only got 3.490 USD for his kidney. Getting back home from the Apple Store, his mother asked how he could afford to buy the Apple products. The boy then confessed that a kidney was missing and she then contacted the authorities.

An Iphone in China will set you back $633 which means Wong's kidney would give him enough money to buy 5 Iphones.

Next Sony Xperia smartphone might have a 4.3 inch AMOLED display

razec10 years, 10 months ago
This is nothing new, this is actually the third time I saw in the news that a Chinese had sold a precious part of its body just to buy an apple product

tranced10 years, 10 months ago
Selling parts of your body and being a Justin Bieber fan are two incredible things

Bonovox10 years, 10 months ago
Oh why?? The iPhone is hardly worth it is it?? I would rather sell my kidney for a Galaxy Note. Not that I'd do that I just think why it's just a phone for feck sake

rikken10 years, 10 months ago
It is so sad that some people are willing to risk their health for pointless things that lasts a year or two. If his other kidney fails later he is in serious trouble

Bonovox10 years, 10 months ago
Indeed. If he comes into trouble and his other kidney fails then he'd be selling his iPhone to get another kidney back

daviep10 years, 10 months ago
according to the bbc website the teenager is now suffering from renal failure and only got $3000 for the kidney!

Tsepz_GP10 years, 10 months ago
Who and where are these kids parents?
This is just pure stupidity for a gadget that will be outdated in a year's time. Why are these kids so materialistic that they are willing to sacrifice a vital organ to get a damn gadget? Makes no sense at all.

ok190710 years, 10 months ago
There are two kidneys but if you lose one, the other is likely to get old sooner than expected and your life will be shorter. An iphone equals to a few years of your life according to this child. I wonder what he'd do if he lost his iphone. No spare kidney, no iphone and no another body part to sell.

tranced10 years, 10 months ago
Don't you get it!? He's thinking there'll be a kidney app in the app store!

markphil10 years, 10 months ago
apple products are made in china

Miss UK10 years, 10 months ago
He may of been influenced to do this teens can be
Influenced in many ways but tbh
I think the others involved with this proceedure
are very spiteful sick people and I hope they get
what's coming to them

These are sad times. This in no way incriminates Apple but it's really bad press. I'll bet Apple executives or human resources committee has already discussed aiding medical attention for this kid yet lawyers have probably advised against this as it would show Apple as partially involved/guilty by perception/and weak as in a target for frivolous lawsuits & fictitious claims for similar non common sense.

etaab10 years, 10 months ago
Is there actually any truth to this story though ? surely nobody is this stupid..

goldenface10 years, 10 months ago
Plenty. It has been reported that the group of people that allowed this to go ahead have been arrested, including the surgeon who performed the operation.
BBCNews.

Bonovox10 years, 10 months ago
Yes, the surgeon should have not allowed this

Bonovox10 years, 10 months ago
We live in a time where material things seem to matter to young people. In a poor country or a poor family the need should be food & clothing. But kids see these things & these days it's all want, want, want. Like I see so many kids in UK today they expect so much from their parents. Gotta have the latest trainers or gadgets or at school they will be a loser. I think this is very sad & no adult should have allowed this. I certainly would not do this for a mobile phone & especially not an Iphone

etaab10 years, 10 months ago
I think how i used to be when i was a kid and then think would i do this kind of thing. Not a chance, in fact such a notion wouldnt enter my head, so i'll go down the route of considering this person rather stupid and probably has some form of mental difficulty.

And why not sell 1 leg to buy a new pair of boots! Stupid is as Stupid does!

On 2012-04-08 20:57:52, Bonovox wrote:
We live in a time where material things seem to matter to young people. In a poor country or a poor family the need should be food & clothing. But kids see these things & these days it's all want, want, want. Like I see so many kids in UK today they expect so much from their parents. Gotta have the latest trainers or gadgets or at school they will be a loser. I think this is very sad & no adult should have allowed this. I certainly would not do this for a mobile phone & especially not an Iphone

Bonovox ... I think you touched on something important in this kids decision without even realizing it.
Material things matter to young people & that kids want, want want.
For kids whom are poor - and I'm NOT talking about not getting to go on a school ski trip that costs the parents an extra $130 for 2 days - I'm talking when both your parents have to make the following decisions paycheque to paycheque that affect the entire family for each week out of a month:
primary needs:
Pay Rent on time or be evicted in less than 3 (you've already had 2 previous N1 notices!)
Goto work with just a glass of milk for breakfast and no lunch; hoping dinner is more than just rice+butter+coconut oil.
kids carrying 2/4 slices of bread with mayo & ham (because its THE cheapest meat at 100g at the deli/grocery store)
The oldest kid will have to eat rice+butter+coconut oil (the latter used to cook the rice) for 3nights/wk while the youngest gets to have chicken with the rice and peas.
when the oldest kid gets kicked out of the house for eating 1 bun (pkg of 6; when the youngest lied to not get yelled at and new the parent that got home from work the earliest would believe them)
Want Material/intangible:
when you're the kid that gets picked on because your wearing acid wash jeans in a time before its second coming 7yrs before.
when you're laughed at because just by colour alone you don't fit in; in this kids case because you don't HAVE what the others have so like Rudolph the red nosed reindeer you cannot join in all the reindeer games (or conversations nor hang out).
Kids are resilient - physically, they can take a HELL of a beating, starve for 36hrs straight and barely show signs of it if not worked so physically hard (repeatedly it DOES show), but emotionally their as fragile as touching a butterfly's wings. When you don't fit in you're rejected, you feel like you have no worth, and come home to the suffering or abuse or fighting of parents over the family's financial plight doesn't help.
I can speak from life experience. But I can tell you I'd rather steal for food (I have many times in my youth for me & my lil sister back in grade school), then give up my body part for anything.
TODAY though ... the internet is just as important as food is or close to a kids learning and thus essentially to their survival: Education (youtube educational videos, wikipedia, blogs, colleges/universities at MUCH $$$ cheaper pricing), self expression (FaceBook, MySpace, Google+, etc, blogs, abuse sites, communities, etc), creative (blogs and so many collaborative sites in the social), so much more!!
now multiply this in a country whose socialistic values are very different from that of UK/USA/Canada/Brazil/Italy/Norway/etc etc!!!
Did any of you find it stupid that ppl laid down in front of tanks at Tianamin Square?! That started a huge revolution that the country is scarred from for generations. On a much smaller scale these kids are fighting their own revolution at school amongst their peers. I fear this maybe a trend that continues

etaab10 years, 10 months ago
I can understand some kids may go to extreme lengths to fit in with the crowd and want the latest bit of kit, but to actually go to this extreme is not the reason imo.
I can imagine kids committing theft, robbery from other kids or many other ways of scraping money together but to actually do this. No, its stupidity for sure.

tranced10 years, 10 months ago
This is marketing at its max!

Miss UK10 years, 10 months ago
I guess its nothing different then a teen having a Child and selling that?
ive read storys of that too !
but Kids will go through lengths to get things if there parents cannot provide them
look at last years August Riots in the United Kingdom
Btw I guess this teen knew it was a wrong thing to do as he never told his parents of his actions
they only found out after he brought those Gadgets home now he has learnt and is facing up to it!