Technical details:
• Acer beTouch E140
• Sony Ericsson W8 Walkman
This might come as a surprise to many of you, but it seems like iOS apps crash more than Android apps 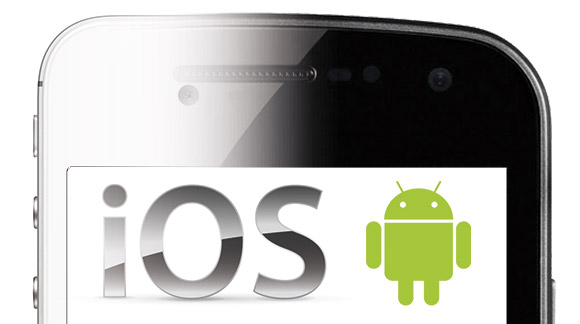 The guys over at Forbes has analysed figures from app monitoring firm Crittercism. What they found is probably not what you expected. Out of the 214 million app launches analysed by Crittercism, 3 out of 4 app launches (162 vs 52 million) was done by an iOS device. The analyse takes the uneven representation into account. The analyse happen between December 1st and 15th 2011 and showes that the most popular Android apps crashed 0.15% of the time they launch. For iOS the numbers were 0.51% per launch. Those apps with fewer installs crashed even more. 0.73% for Android vs 1.47% for iOS. The apps with the least install base show that 2.97% crashed per launch on the Android platform vs 3.66% on iOS.

Like Tomio Geron over at Forbes has done, we could analyse these numbers all day long, but the data seems to point in one direction. If you look at number of crashes per app launch, Android beats iOS. Even though there are no definite explanation why this happens. One reason could be caused by lack of testing by the developer on particular OS versions. iOS 5.0.1 had just been released when the data mining took place. Keep in mind that on the Android platform it is easy and much quicker for developers to release new updates of buggy apps. Updated code in iOS apps must be verified by Apple staff before bug releases can be release in the App Store. 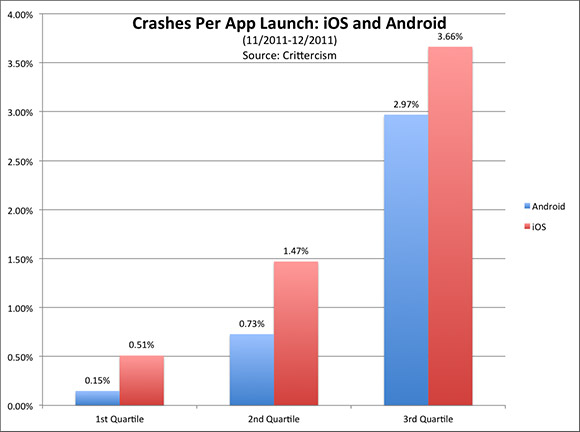 masseur11 years ago
it is a surprise. the only time I have ever seen a crash on iOS is when I am running an app on a new version of iOS when that app hasn't yet been updated and released for changes to iOS.
Most apps usually work from one version of iOS to the next, but sometimes something unavoidable does change to cause an incompatibility.

laffen11 years ago
iOS does not inform the user of crashed apps does it? Android does. Maybe Android users are more used to seeing "No reponse from app ***. Do you want to wait, or force close?"

masseur11 years ago
in iOS, if an APP misbehaves, iOS closes it and you unexpectedly return to the dekstop.

Anyway, without joining criticism (which I may now do as it looks interesting) its hard to judge these stats.

If an App sells 100,000 on iOS and 50,000 on android, and it crashes 5% of the time on each, clearly iOS would come out as worse. Thats the nature of statistics and that is what the graph in the opening post appears to show: i.e. crashes per app per platform.

Bonovox11 years ago
I see masseur's point in that if something sells more then you hear more complaints about it. Like more donwloads means more crash reports

Not true.
It is only about percentage here, not number of times an app has crashed. If an app crashes 5% on iOS and 5% on Android, it crashes equally number of time. The data set is normalized.
Check out the graph with Crashes by OS Version Normalized
[ This Message was edited by: laffen on 2012-02-03 23:11 ]

masseur11 years ago
apologies. I did not fully comprehend the details in the news item and merely based my reply on the opening post details.

However, having now fully comprehended the news item there seems to be some disclaimers such as the speed that developers can release fixes to android software vs iOS, how much testing goes into each o/s release, and also had android ICS been a factor then these statistics may well have been quite different.

Again... such are the issues involved in showing simple graphs to try and make some point.

However, more than these... my research also now shows that the company providing these stats (crittercism) were a startup in 2010 which received significant funding from google in mid 2011.

That alone makes them no longer impartial IMHO.

I know. That is why I mentioned it in the article

chunkybeats11 years ago
maybe Google should do an Apple and use false advertising/marketing and claim that this is the best OS ever!!

Run_dawn1011 years ago
I've had apps crash on various instances on both OS. But at least Android gives a more desktop-like Application Not Responding notification.

djin11 years ago
I too have experience more frequent crashes in ios, especially ios 5 than my android 2.2 . I think the apps were more stable with ios4.. Also it could be that i use apps alot more in ios as compared to android since I feel i can do most of the things at os level in android as compared to ios... Hence more crashes experienced?

etaab11 years ago
Like this even matters though. The actual number of crashes by either platform is really small when compared to old operating systems like Symbian. I cannot believe these people even performed this kind of research. Total waste of time imo.

Bonovox11 years ago
And money?? Does research cost money??

masseur11 years ago
@etaab, I guess this is just a by-product of their main service, which is to provide developers with in app crash reporting of unhandled program crashes. It would take little extra effort to collate the data being sent to developers.

tranced11 years ago
@etaab: there's a research for everything. There are even researches saying people are this way because they use an OS.

etaab11 years ago
Then theres researchers researching the researchers findings, like you'll get reports from one company claiming Apple are dominant in a specific market, then another claiming the opposite just a day later saying the other company are talking waffle.
Effort being little or not, i still think its not really necessary for us to know this, even if they supply developers such information.

masseur11 years ago
but surely any information that adds to purchase decisions is useful information, thats what the internet is good for... or do we not need people spending time reviewing products either

in this case it seems to be objective information that is given as it is supposed to be derived from emperical data, compared with reviews which are very subjective

etaab11 years ago
I just feel its going a bit too far in comparisons. As you know i do my fair share of Apple bashing (not Apple product bashing though..) but some of these most recent comparisons are a bit extreme. Heres another today..
Designed in sunny California, the iPhone isnt too good at handling the cold  in fact, Apple only guarantees it will work between 0°C and 35°C.. READ MORE
[ This Message was edited by: etaab on 2012-02-06 21:04 ]

masseur11 years ago
this is getting a bit off topic but this is not a guarantee at all, moreso an advisory. All manufacturers have this and its usually based around the limitations of the battery.

Here is the Apple operating temperature range statement where it says that low or high temperature might cause issues, but reading further you can see that the device protects itself if needed.

Randomly I have just googled the SGS2 manual and it says:-

in which it seems confliciting that the device can operate between -20 and 50 degrees and yet the battery has to be stored (or as Apple call it - non operating) between 0 and 40 degrees. So be sure if you turn your SGS2 off, that you are within that range... doesn't make sense

you'll find that other manufacturers have similar limitations in similar ranges based on the battery requirements, and some like Samsung claim they can actually operate outside those limitations and certainly they can. I would argue that Apple are simply playing it safe in their statement.

Anecdotally, I have used an iphone 4 last year in Queensland in 40+ with high humidity without issue, and I recently used my 4S in Switzerland in -15 degrees and just last weekend in UK in -7 degrees, all with no obvious effect.

etaab11 years ago
Yeah its a little off topic, but then so am i moaning about how anal these people are about comparing things. I understand the Finns want a phone that will work in their wintery landscape, but for the rest of us its a total waste of time knowing this information. The problem is people still use this type of information to slander one brand over another, which i would do if i were a fanboy of a particular brand.
What will they compare next ? The iPhone cannot be used by someone with poor personal hygiene due to the smears of grease on the glass ? The SGS2 cannot be used by people with blonde hair ? The HTC Sensation cannot be used in areas where there is a risk of insects that might get inside the phones casing (a small dig at the poor build quality of most HTC handsets there, get it ?)
Basically what im saying is they're comparing NONESENSE !! - all imho anyway !

masseur11 years ago
lol... fair enough.
anyway.. after all these years... everyone is still comparing against the iphone so it seems it is still the benchmark device, as is the ipad now, as is the ipod, but not so the mac... well... except the macbook air which the new range of windows ultrabooks have been created to compete with
as for comparing nonesense, as I said before, its really just a by product that gets the company exposure in places they wouldn't normally get it. I certainly never heard of them before but being able to track crashes in real time and respond is definitly a +ve imho

Miss UK10 years, 12 months ago
I sometimes use my iPhone in bed and it gets pretty hot
ive noticed twice its crashed on safari its on the logs
I guess they will be sent to apple when I plug it in to iTunes

etaab10 years, 12 months ago
All phones can get hot depending on what you're doing with them and in what circumstances.

Miss UK10 years, 12 months ago
I know they can theres also issues with them exploding

and thats not only Apple phones by the way

etaab10 years, 11 months ago
Nokia phones were often known for batteries exploding when i was more into SE phones back in the day.

Syllabus10 years, 11 months ago
Oh, well...
The thing is (and that's why the number of iOS crashes raised, and Android is behind):
As someone stated, iOS apps will rarely crash while usage. Why? Because they all pass through an inspection when submitted to the AppStore.
So why were they crashing a lot in the last months, and Android has less crash numbers than iOS?
Well, that's why in iOS 4.3, there was no Garbage Collector implemented on the iOS. That means that we ( CocoaTouch/Objective-C programmers) had to handle all the allocated objects in our code.
Now, in iOS 5, the iOS takes care of our objects, since Garbage Collection has been implemented.
This means that, when the first object in our code is released, the probability that the app will crash is tremendous, because we will be inflicting an exception to the OS.
So probably, all the apps you have that have not been updated to be compatible with iOS 5 will crash when started/used for a small amount of time.
Hope this information clarifies a bit