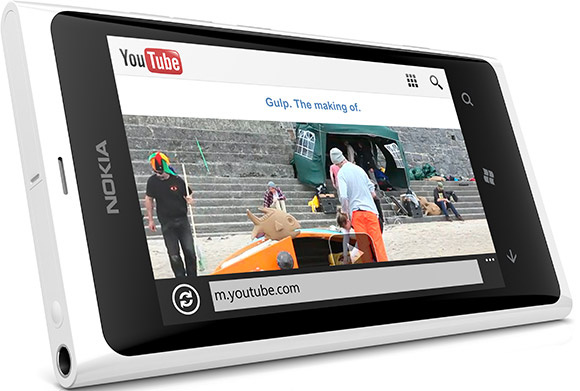 The Nokia Lumia 800, or the first real Windows Phone as the Finnish company is brave enough to call it, was at launch available in the three colours red, blue and black. This was a colour range the Window Phone model inherited from the Nokia N9 Meego smartphone.

Changing the back cover of a mobile phone is not as easy as it used to be. Back in the old days, Nokia used to sell mobile phones where you could choose between dozen of different back covers. Unlike the Lumia 710, it is not going to be easy to swap the back cover of the Lumia 800 series, so Nokia must choose the colour for you. The white is a nice addition to the existing red, blue and black. The Nokia Lumia 800 back cover is made out of polycarbonate which is a type of plastic with good electrical insulator meaning it does not hinder network signals as much as traditional materials do. This result in increased battery usage. Without further processing, the polycarbonate is transparent so the colour must be mixed in during the moulding process.

We sure liked the colour, or rather the lack of colour. But is this a deal breaker for you? Will this boost Nokia's Windows Phone sale?

Bonovox8 years, 11 months ago
Very nice but that matt finished polycarbonate body will get dirty fast. Prefer the Cyan and black

false_morel8 years, 11 months ago
hmmm.. let me guess, next color is yellow!!

hihihans8 years, 11 months ago
@bono. it's not matte, it's glossy.
Red cover is already available just as LimeGreen

Bonovox8 years, 11 months ago
Ah I see that's good then

You mean the white one? Did you read it somewhere or already seen it or just based on online photos?
Red cover is already available just as LimeGreen

Yes I know these covers.. Are they the exact same ones as those included in the package btw? Fitting as much tight?
But still, I prefer my phone without covers and cases.. It just loses its sexiness, genuinity, and appeal!!
Totally different to the phone being green itself..

Otherwise, why would Nokia release four different colors so far? They can make one color and do covers..

julias8 years, 11 months ago
Its definitely GLOSSY and not matte here is a one review that confirms that.
http://www.pocket-lint.com/ne[....]white-nokia-lumia-800-phones4u

Bonovox8 years, 11 months ago
That's fine I just never knew cos the other models are matt. Glad it's glossy. Actually the red one looks ace

false_morel8 years, 11 months ago
thanks for the hint.. Now I wish that Cyan was glossy.. Although it's appealing enough as it is..
@ Bono
That magenta looks amazing in photos, but in person it's an extremely female color..
Waiting for the green version.. They have to do it!

mriley8 years, 11 months ago
I think a silver Lumia would look great, I'm not sure I like pure white phones, they stand out too much. I think the new HTC Sensation in silver looks awesome, they should do the same with this phone imo.

OK so well if it looks more pink tha red then it's a no no. The Lumia is gorgeous in the flesh the screen is beautiful

OK so well if it looks more pink tha red then it's a no no. The Lumia is gorgeous in the flesh the screen is beautiful

false_morel8 years, 11 months ago
hmm.. Seems Nokia listened to me!! Red and Green arriving..
I can now declare myself as happy Lumia man..