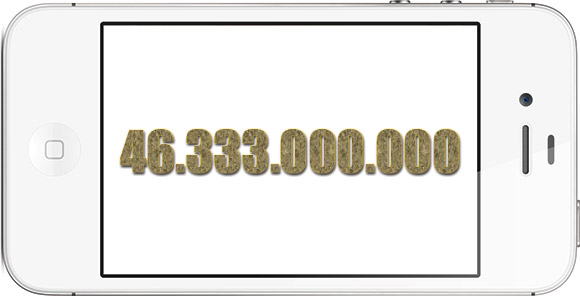 $46.333.000.000 is what the Apple revenue was during the three months ending on December 31 2011, Apple's fiscal 2012 first quarter. Both the revenue and net profit of $13.06 billion was historical high for the company. Previous quarterly revenue was $ 26 billion so the impact of the iPhone 4S with was launched in the beginning of the fiscal Q4 is clearly evident. The expected revenue in the upcoming quarter is 32.5 billion, but Apple is know for its low estimates, so this number will most likely be higher.

Apple sold 37.044.000 iPhones during the three months. That is 411.555 phones per day, 17.148 per hour and 285 iPhones per minute. Impressive numbers. Now we understand why it is important to have a reliable component suppliers and assembly lines for the popular phone. 37 million units is a 128 percent increase compared to Q4 2010 when only 16.2 million iPhones was sold.

This is how Apples revenue is broken down:

The iPhone post with revenue of $24.417 million is divided on 37.044.000 and this should be $659 per unit. How is that possible? Does Apple earn $659 per sold iPhone? No. The reported sales figure of 37 million is for sold iPhones. But the revenue number also includes iPhone services and official and third-party iPhone accessories. The official accessories are for example the $29 black bumper, $19 Dock to USB cable or the $15 anti-glare film. As we have reported before, those thousand of companies making iPhone accessories must pay Apple a license fee for being registered in the MFi program (Made of iPhone/iPad/iPod) where they will receive technical info, product certification and the MFi logo. Apple collects a royalty of 20-25% per sold accessory.

The numbers we see in today's quarterly report should back up the company with financial muscles to continue be one of the leading within its sectors for years to come. By the way, Apple spent $758 million on research and development during the quarter, so we should expect something revolutionary and reinvented from these spendings. We have a saying in Scandinavia that says "Trees never grow into heaven" which means that all good things have their limits. What do you think? Will Apple be the only maker of smartphones left ten years from now?

julias11 years ago
Good so now they can afford to lower the prices of their over priced products and sell even more but will do they do that?highly unlikely.
[ This Message was edited by: julias on 2012-01-25 22:03 ]

Bonovox11 years ago
I doubt it

etaab11 years ago
Do you think they could lend us a tenner ?

For your taxi home from Apple store

julias11 years ago
Does anyone know if Apple donate to charity the way Microsoft does?

Bonovox11 years ago
Richard Branson is worth now about 4.2 BILLION!!

chunkybeats11 years ago
I knew Miss UK would be straight on here with a comment...... I still remember you had an SE now your just another ifan, a sad road to see

etaab11 years ago
The whole brand identity thing is a major cash cow for Apple. I was in the Meadowhall shopping centre this evening, a really huge shopping mall in Sheffield. For a Wednesday evening, it was pretty quiet at 7pm, no major crowds in any stores.
Except the Apple store which was completely packed out. Thats one intoxicating brand Apple have created.

Bonovox11 years ago
Not everyone out there is happy with the new 4S. Despite big sales all I read is people pissed at Apple or You Tube videos complaining about Apple. I had the iphone 4 it was ok for a bit but I found it bland

On 2012-01-25 23:03:14, julias wrote:
Good so now they can afford to lower the prices of their over priced products and sell even more but will do they do that?highly unlikely.

They sold 37m iPhones in that quarter and still couldn't keep up with demand, so that's probably not top of their to-do list..

etaab11 years ago
Its on their Not to do list.

Miss UK11 years ago
@ Chunky, Ive always had iPod touchs I wanted to own something reliable and something that would last
the iPhone is doing that

@ Bono, someone needs to tell MR Branson to sort out my Internet then

On 2012-01-25 23:03:14, julias wrote:
Good so now they can afford to lower the prices of their over priced products and sell even more but will do they do that?highly unlikely.

They sold 37m iPhones in that quarter and still couldn't keep up with demand, so that's probably not top of their to-do list..

. Q after Q after Q they just keep blowing analysts away, congratulations to them

They now have around +$98Billion worth of investments, it must be amazing to work for them and to be an Apple shareholder although i hear they are pretty tight-fisted in paying out dividend.
Nokia are announcing their results today, wonder how they will stack up next to Apple and Samsungs results, we will finaly know if Lumia range are realy selling.
[ This Message was edited by: Tsepz_GP on 2012-01-25 23:57 ]

Bonovox11 years ago
Everyone's buying expensive Apple devices. Who said there was a recession on??

this happened in the UK last year iPhone muggers murdered man with screwdriver...

etaab11 years ago
I should hope they pay back their investors with big bonuses. It would be nice also to see some investment aimed at innovation of new technology rather than law suits.

julias11 years ago
And a large chunk of the profits should also go to good causes and charity.

nicv2711 years ago
If apple products were that bad.... Surely they wouldn't earn this sort of money, And before the "Haters" say they are all fanboy buyers. I used to manage sport shops and was a massive Adidas fan, but if they released crap design/colourways I didn't buy them....