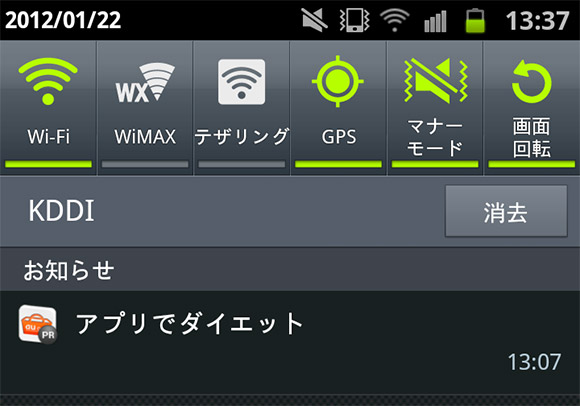 Look at the last line on the screen dump above. According to the blog AsiaJin it translates to "Diet by an App". It is an ad sent to the notification bar on an Android smartphone by an operator controlled app. KDDI is the second largest operator in the country that's modified the basic functionality of Android by installing an extra market app on the phones.

KDDI smartphones are Android certified and therefore has access to the official Android Market. But KDDI have their own market named "au one Market". And it is the app for this market that's responsible for the unwanted advertisement. It runs in the background all the time and pushes ads to the phone whenever it likes.

The new advertisement functionality came with one of the latest updates of the app. When installing the update, users were show a confirmation dialog (shown below) where the OK button confirms that you accept the Market terms and that you will accept incoming ads. The clever thing here is that the link you see in the second paragraph of the text takes let you opt-out of the agreement. But who ever read these end-user license agreements? Do you? 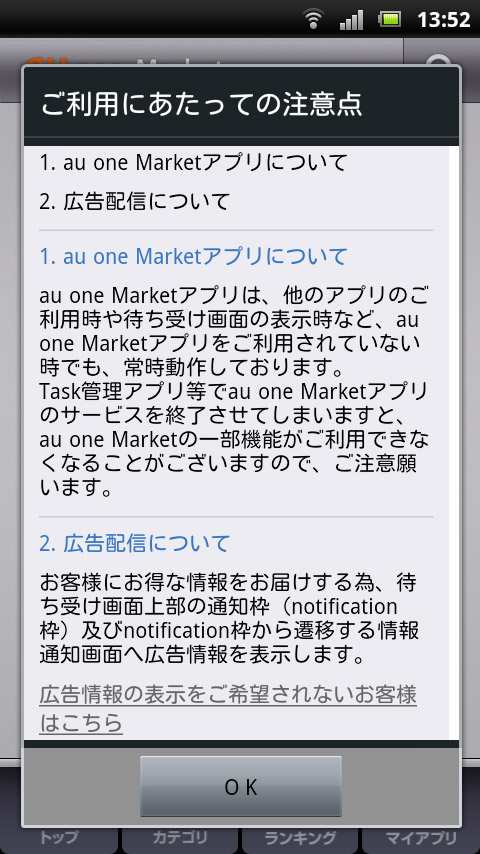 ofiaich8 years, 8 months ago
Hi!
A pu ri de da i e tto!
アプリでダイエット！
An application for diets!
Probably hundreds of them to look at so if you don't eat whilst searching, then you can loose weight

Bonovox8 years, 8 months ago
I would find that really annoying

etaab8 years, 8 months ago
Im not sure how the notification area is programmed, but surely Google didnt put the possibility of advertisements to be pushed to the phone ? that must be a network operator addition ?