According to the unofficial numbers reported by androlib.com, Android Market has just pasted 200 000 available applications. 205 978 is todays number. Of those are 135 663 (66%) free apps and the rest 70 315 are paid apps (34%). The Android Market has doubled since July earlier this year, and approximately 1 000 apps are published daily in the Market.

The relatively new Windows Phone Marketplace has also just reached a milestone. According to wp7applist.com, there are 5 012 apps available today. That is 1 000 more since December 11th. 58 per day the last 17 days. If we compare the persentage of free WP7 apps vs Android, we see that most developers choose to charge for the apps they are creating for Windows Mobiles. 72% of the apps in Windows Phone Marketplace are Paid and only 28% are for free.

If we look at the iOS apps found in the Apple US App Store we will see that 19 173 apps was approved in November. That's 639 apps per day. Less new apps compared to Android Market, but ten times the number of new apps in Windows Phone Marketplace. It took Apple two years to fill the App Store with 200 000 apps. Android used one and a half year.

Developers need to consider a copule of things before they start to create applications for smartphones. Which platform is the easiest to develop for, which one has most users, on which platform are users more likely to pay for my app and which platform will continue to grow in the future? And for some developers the uncertainty if the app will be approved by the app store must be considered.

We have inserted the above numbers in a spreadsheet and looking at the numbers tells us that Windows Phone has got a slow start compared to App Store and Android Market. Another interesting thing is that new applications added per day in Android Market has just passed new daily apps in App Store. In October 2010 Android Market got 20 956 new apps while the App Store got 20505 new apps. Maybe App Store has enough Tetris Clones, while there are still room for a couple of more in Android Market? 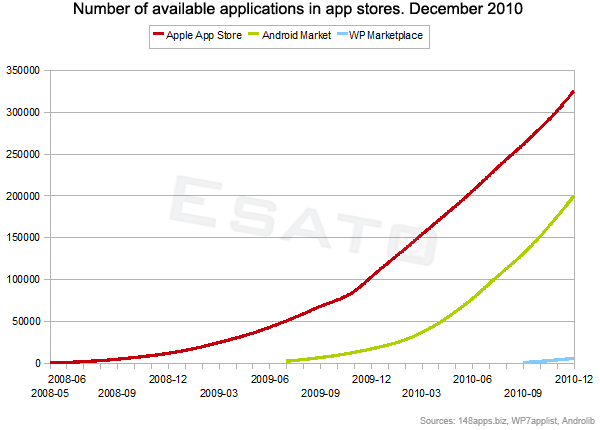 There are of course more platforms available for mobile phone content developers, but the three mentioned will most likely be the market leaders in the future.