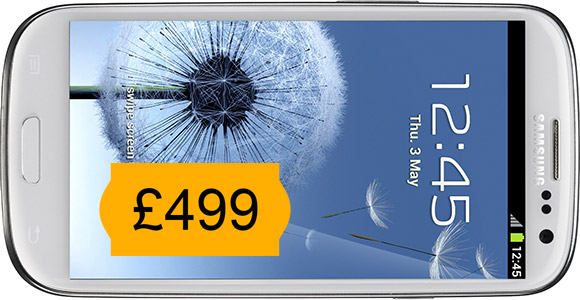 The Samsung Galaxy S III which was announced yesterday is now available for pre-order at Carphone Warehouse for £499.95. Carphone Warehouse is by the way one of the online retailers we use in our price monitor service. One of the other stores we are monitoring is selling the Galaxy S III for £549 unlocked. It is still lower than one of the most expensive phone in the market, the Iphone 4S. The latest Apple smartphone will set you back £560 if you compare the prices at those sites we monitor. The Iphone is a little less expensive over at Apple's own store where you can get the 16GB edition for £500.

As you can see from the Galaxy S II price chart, the previous flagship model from Samsung entered the market one year ago with a price tag of £519 which means that the Galaxy S III at launch date will be cheaper than the Galaxy S II was. The cheapest Galaxy S II is now available for £394. Our impression is that the most expensive phone models not fall much in price after online stores has started to sell them. In fact, we think that consumers will gain more by waiting for a price drop on low-cost models.

Esato does not sell mobile phones, we just monitor the price by fetching price data once a day. We have done this since 2004 and we have currently over 215,000 entries in our price database.

Under the hood of Nokia 808 PureView

Miss UK9 years, 5 months ago
Wow do all phones cost this nowadays
Or is it just the most popular ones lol

Miss UK9 years, 5 months ago
with the iPhones its dependant on the Size of memory hence the price
they all do the same and look the same

Miss UK9 years, 5 months ago
Apple tend to drop prices when there
New devices show up so I expect the 4S
To come down I guess when the next iPhone
Appears

The worst phone that devalues quick was
That HTC Sensation I thought !
Don't know about Samsungs cos ive never
Liked the Design of the S2 and the S3
The S1 was good though a lot nicer then 2 and 3

Miss UK9 years, 4 months ago
Galaxy the First was simply the best one from what I saw of it design was really nice
and well everything else on it seemed my cup of tea I didn't have much cash at the time it cameout
so I missed out on it