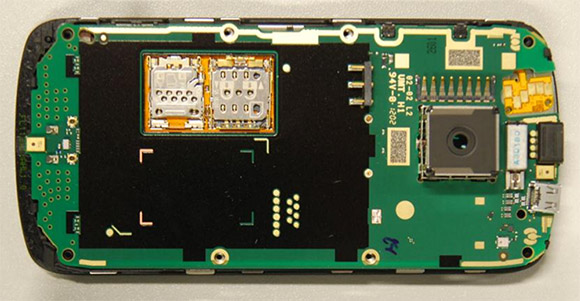 We totally understand that what it looks like inside of a mobile phone is for those geeks specially interested in mobile phones, like our readers. But as the Federal Communications Commission in the US has dissected and published a group of detail photos captured of the 808 PureView we though it could be interesting for some of you to see what the large mobile phone camera sensor looks like. The 808 PureView's 1/1.2-inch sensor is almost five times the size of more normal sized 8 megapixel sensors in other smartphones sold today. As you can see from the picture above, the sensor occupies almost one forth of the device width.

Although the sensor has 41-megapixels (7728 x 5368 pixels), the largest pictures produced by the Nokia 808 PureView is only 38 megapixels large. What happen to the three "missing" megapixels is something we explained in the 808 PureView introduction article.

The Nokia 808 PureView will be available in selected markets in May.

Samsung aiming to sell over 200 million smartphones in 2012

Guarulhos10 years, 9 months ago
Good News For Americans, Who Can Enjoy The Quality Of The Peerless The King Of Cameraphones !!!

Mark_Abad10 years, 6 months ago
So that square thing is big already?

P.S: The Image Sensor Integrated Into The Galaxy S III Has Exactly The Same Dimensions Of The IPHONE 4S !!!

ILoveBhe10 years, 6 months ago
^
Awts. That SIII thing is so puny.