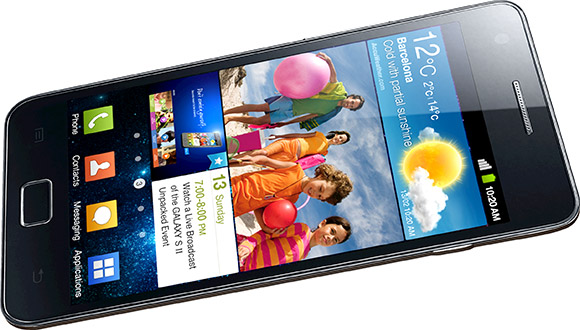 The Galaxy S II has been one of Samsung's most successful smartphones of all times. The South Korean company has sold over 30 million units of the device and it does not look like it's going to stop there.

A new version of the Galaxy SII will soon be available in Germany according to the online retailer Cyberport. The new version is available for pre-order for Euro 469 which is the exact same price they charge for the original Galaxy S II. That is actually no surprise as the two models are close to identical.

Galaxy S II v2, as the Cyberport store call new model has a new dual core processor from Texas Instruments on board. Clocked at 1.2 GHz it should perform as well as the original Galaxy SII which has Samsung's own Exynos processor. Both processors uses ARM Cortex-A9 architecture. The Samsung Galaxy Nexus is also powered by the processor from Texas Instrument and this might seem strange. Why would Samsung use a third-party component provider for its smartphone if they in theory could make the CPU in-house? Well, the Galaxy Nexus is the official Google phone and Google has its say of which parts they want to use. For some reason, Google wanted TI inside the Nexus. Samsung's decision to use TI could be as simple as lack of production capacity for the Exynos processor.

Samsung Galaxy S2 v2 will be shipped with Android 2.3 Gingerbread. Samsung has earlier promised that the Android 4.0 Ice Cream Sandwich update will be ready for Galaxy SII in the first quarter this year. This means that Galaxy S II can be updated to ICS less than two weeks after the model is available in stores.

skblakee10 years, 7 months ago
What is the difference here with the regular one?

Bonovox10 years, 7 months ago
Would have been nice to see a screen res bump up

etaab10 years, 7 months ago
Sounds like a gap filler to me. I dont think Samsung are silly enough to let SE.. sorry, Sony, Motorola, HTC etc to release phones with HD screens, 1.5ghz cpus and everything else higher than the S2. I think they're holding out to release the S3 with even bigger specs.

On 2012-02-18 20:30:14, etaab wrote:
Sounds like a gap filler to me. I dont think Samsung are silly enough to let SE.. sorry, Sony, Motorola, HTC etc to release phones with HD screens, 1.5ghz cpus and everything else higher than the S2. I think they're holding out to release the S3 with even bigger specs.

They already have a phone with those specifications.
It's called the Samsung Galaxy S II HD LTE.

Unfortunately it's only released for select markets and it uses a Snapdragon SoC, which is inferior to the Exynos SoC. But, you do have KDDI's Galaxy S II which has a 1.4 GHz Samsung Exynos SoC with a 4.7 in Super AMOLED 720p display and a WiMAX radio.

Tsepz_GP10 years, 7 months ago
Amazing, a whole year later, and NOTHING in Android world to this day matches the powerful Exynos in the GS2 and GNote.

etaab10 years, 7 months ago
Sorry for my ignorance, but isnt the Tegra 3 more powerful ?

Tsepz_GP10 years, 7 months ago
Could be, havent seen any official benchmarks done with a Tegra3 running device yet, although there is the leaked ones of an LG with it, and its results were around the same as a GS2 on ICS, so i took them with a pinch of salt.

etaab10 years, 7 months ago
This is a good read, if you havent already seen it..
Im looking forward to what Samsung will have from their March 15th conference. I always prefer this time of the year, knowing the summer is ahead of us as are footbally tournaments, sports i love and of course new phones.