The Google Nexus S announced earlier this month was the first mobile running Gingerbread, version 2.3 of the Android operating system. The source code became available for download four days ago, and it did not take long before the Android community was able to upgrade other phones like Galaxy S and Motorola Droid to version 2.3. Instructions for Droid here. These "hacks" are unsupported by Google and the manufacture of the phones but it seems like it is a trivia task to do the upgrade. It might be easier for phones running on a OS without too much manufacture tweeks to have these updates installed. Both Nexus One and Nexus S are running the plain version of Android and even if the Nexus One hardware not are topnotch by this month standards, it might acctually run faster because of the optimized code.

Today Google announced via their official twitter account that owners of Nexus One will be able to upgrade their phones in a couple of weeks time as well. 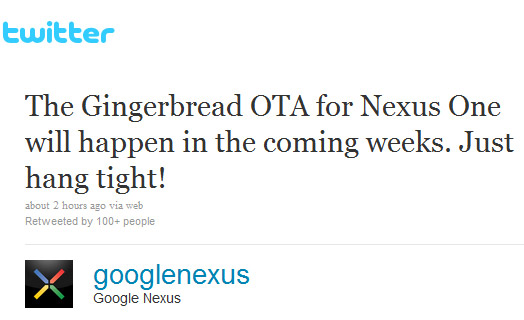 Comments
On 21 Dec 02:59 raistdejesus wrote
"weeks"? that's what Reto Meier said 2 weeks ago. So this time around if it's "weeks", then it means 2 or 3 weeks? otherwise they should have just said "month".