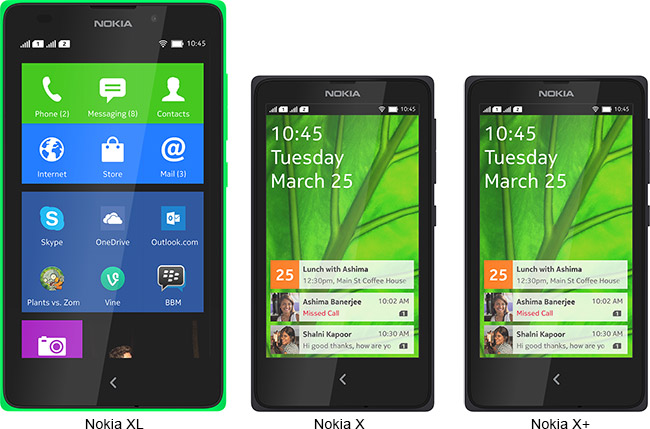 Just weeks before the finalization of the transaction where Microsoft buy the Nokia Devices division, the Finnish handset maker choose to announced that it will ship three devices running the competitive platform to Microsoft Phone 8. The three new devices is the 5-inch Nokia XL and the two 4-inches Nokia X and Nokia X+. The two later models are identical except from that the Nokia X+ has 256 MB more RAM.

The Nokia X, X+ and XL runs on the Nokia X software platform which is based on the Android Open Source Project. Nokia has chosen not to buy a license from Google for the official Android trademark which means that neither of the Nokia models has access to Play Store, Google Search, Google Now, Google+, Google Maps API etc. Nokia claims that 75% of the apps available in Google Play Store is compatible with the three X's. Apps which has implemented features such as In-App billing, Account authentication or Location API offered by Google Play Services will not run on the Nokia devices. Nokia has set up it's own Store but developers will have to modify their app and submit it to the Nokia Store if they want to offer the app to Nokia X owners. This is almost identical to what Amazon has done with the Fire OS fork for the Kindle Fire tablets. We doubt that Nokia will continue with the Nokia X software platform after Microsoft takes control of the company, so the new smartphone platform could be dying very soon after the the birth.

The three Android smartphones will have a retail price which are between the low-end Nokia Asha series and the higher-end Nokia Lumia range. Nokia X will ship for 89 EUR, the Nokia X+ for 99 EUR and the 5-inch XL-model will set you back 109 EUR.