Palm is for many a brand for the US marked, which was demonstrated by having the announcement of the new model during the Consumer Electronics Association (CES) in Las Vegas last month. The first batch of Pre will only be available to the US network operator Sprint in the first half of 2009.

I was given a demonstration of the Palm webOS during the first day of Mobile World Congress. What I saw impressed me much. The hardware might not be of top range in terms of top-of-the-range specification, but the user interface sure is. The Pre runs on Palms newly developed webOS and are currently only supporting EVDO networks which not are common in the Europe. We will have to wait for a GSM version of the palm. There are negotiations with some European operators, so we will hopefully see it here in the near future. Today I was also demonstrated the Samsung Omnia HD, LG Arena KM900 and HTC Touch HD, Nokia N97, Sony Ericsson X1 and Garmin-Asus nüvifone G60 which can be classified as the high-end models from the competitors. In my opinion, the different versions of Symbian driven devices is the only one comparable with the webOS. All Windows Mobile devices manufactures put their own "layer" on top of Windows Mobile, and for some models, this layer works quite well. But you will eventually enter the usual of Windows Mobile interface somewhere down the menu system. And that means the your finger must be replaced by a stylus. Some of the Windows Mobile devices do not even have a hardware keyboard making it a little difficult to enter text.

The Palm Pre is a slider model and it is possible to use the phone without the keys extracted. It has a touch screen in addition to a small touch sensible area below the display. This area are used for main finger gestures like entering the main menu etc. 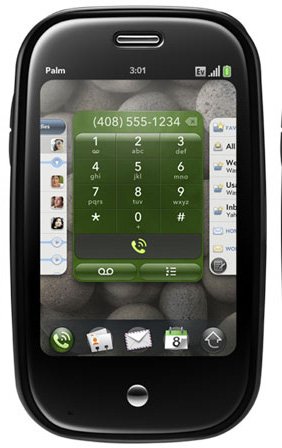 Every open application will have its own small "window" and dragging a finger across the screen will scroll trough them all. Since this is a multitasking OS, all windows, except the video player, will have their own life doing it did when you left it. If you started to scroll down the contact list just before you left a window, it will continue to scroll even if the window is hidden. The Pre does not have any close-button. Just drag the window out of the top part of the screen and it will close/end. The demonstration lasted for 15 minutes so it I can not write about everything I saw, but it was impressive and intuitive way.

Most of the user information stored on the Pre is seamlessly linked together, just as it should be in the perfect device. Contact details can be downloaded from a Facebook or Gmail account. I do not recall everything here, but everything just seemed correct. And no, it was not cute a female Palm representative doing the demo.

Some of the finger gestures possible on the Palm Pre is similar to the one used for zooming on Apple iPhone. It has been much talk about the Apple patent for their zoom gesture. On a direct question about this patent, the Palm tech guy told me he would/could not give me an answer and directed me to the marketing people. I never talked to them, but later that day I spoke to Synaptics, a company developing touch screen interfaces, which told me that the Apple patent did not apply to their products. I was told the patent is for a algorithm calculating the horizontal and vertical movement of a finger and there are no need to use that particular algorithm for finger gestures.

Palm Pre is an always on device requiring a connection to the Internet. You should go for unlimited data plan when purchasing a Palm Pre.

Comments
On 22 Feb 09:21 carkitter wrote
Very nice UI but is it going to find its way out of the US and will it be of any use for ordinary comsumers or just a device for a small number of business users not already commited to BB, WM and iPhone?

Looks very promising but still a long way to go to become as well accepted as the iPhone.
On 18 Feb 11:09 razec wrote
Very nice GUI. i'm impressed :) i hope android can get this good as well
On 17 Feb 18:49 NightBlade wrote
Not where I'm from.
On 17 Feb 13:29 James wrote
I don't see what's so scary about that - lots of people already have unlimited data plans. O2 and T-Mobile un the UK do them for just £7.50 per month. Combine that with an HSDPA handset and you're flying. =)
On 17 Feb 12:52 NightBlade wrote
"Palm Pre is an always on device requiring a connection to the Internet. You should go for unlimited data plan when purchasing a Palm Pre."
NO, Thanks!