Technical details:
• Acer Liquid
• Acer Liquid E
• Acer Liquid Metal
Camera phones could soon have lenses made from nothing more substantial that a couple of drops of oil and water,but will still be capable of auto focusing, and even zooming in on subjects.

Varioptic, the company that holds the patents for liquid lenses made using electrowetting technology, will be demonstrating its innovative breakthrough technologyu during Photonics West in San Jose, California from 2227 January 2005.

Overall mobile handset sales reached over 500 million units in 2003 and are expected to grow at an 8% - 10% CAGR through 2008. One of the key features driving handset sales is the inclusion of a camera. Over 10% of cell phones sold in 2003 had cameras. Analysts expect this to grow to over 40% by 2008.
Varioptic believes that all camera-enabled cell phones will include auto-focus or zoom features, just as all digital cameras do today. The key drivers for inclusion of these features include:

Demand for macro functions. Cell phone cameras are frequently used for utilitarian purposes, such as taking a picture of a page of information from the newspaper. Current fixed-focus cameras cannot focus effectively at short distances. Demand for this feature among camera phone users is so widespread that some phone manufacturers in Japan sell an accessory macro lens users can hold in front of their camera phones when needed.

Zoom lenses are a standard camera feature that customers want on their camera phones as well. All but the cheapest cameras on the market today now include a zoom function, because of the convenience and usefulness of this feature.

The digital camera (DSC) market is more mature than the camera-enabled cell phone market, and requires larger, higher quality lenses. Varioptic will initially target the smaller size DSC market, including cameras with a capacity of 2 million pixels and below. Approximately 50 million low-end DSCs were sold in 2003, and analysts expect the market to grow at a 19% CAGR through 2008. The company is also developing relationships to build high end digital cameras that take advantage of the Lens for ultra-rapid focus.for more information go to: www.varioptic.com 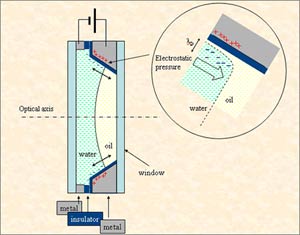