It is no big surprise that LG would announce a 3D smartphone at the Mobile World Congress in Barcelona on February 14th.

After all the leaks LG found it usefull to confirm the rumors. The smartphone will be the worlds first 3D smartphone capabable not only to view 3D media, but also record video in 3D using its dual lens. The 3D viewing experience is possible without any special glasses. LG Optimus 3D is the official name and it has HDMI and DLNA output making it possible to view content on other devices as well. The 3D experience will of course only be viewable on the Optimus 3D itself unless LG comes up with another 3D monitor. Todays press release does not say if the recorded video will be viewable on other devices or if the recorded content are tied to the Optimus 3D.

We do not know if the 3D recording will be in HD, but will for sure get more details about this phone at the MWC and keep you updated. 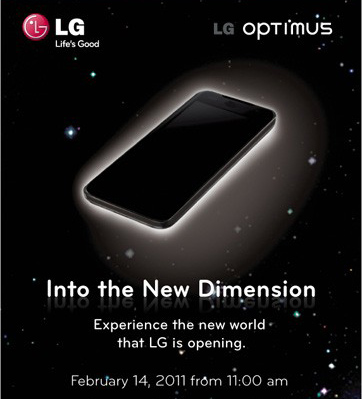 tranced11 years, 10 months ago
One thing we would like to know it's its screen size. It should be big enough to appreciate the "3d-ness".

masseur11 years, 10 months ago
I normally grab at new technology but I just can't buy into this 3D thing yet , not on TVs and on phones as it all just seems a bit pretend and awkward.
I do look forward to the day our phones can project real holographic-type 3d images out of the phone!

tranced11 years, 10 months ago
Something like the Mozilla Seabird concept?

or more likely something like this projected just above the phone

but obviously in full quality!

tranced11 years, 10 months ago
Eeehh ok. So LG needs to team up with George Lucas?

masseur11 years, 10 months ago
no, I'm wanting something real