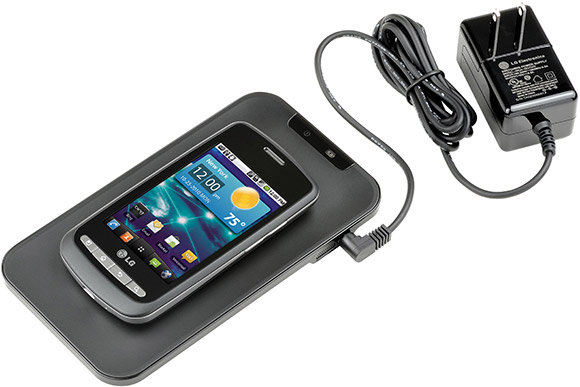 The Wireless Charging Pad WCP-700 is the first wireless charging solution for mobile phones from LG. A mobile phone is charged using inductive coils built into the battery doors and internal contacts.

The LG Wireless Charging Pad should be easy to use. Just place the phone on top of the charger pad and look for one of the visual, audible and tactile feedbacks to see when the phone is placed correctly on the charger. A LED indicator shows the status of the charging which are Ready to Charge, Charging and Fully Charged. The size of the Wirelress Charging Pad is 160 x 90 x 9.9 mm.

We expect to see support for the Wireless Charger Pad in upcoming LG phone models. LG does not reveal if this charging solution will be available for existing phone models.

LG is not the only manufacture with wireless charging solutions. HP has a similar solution for their newly announced HP Pre3. It is called Touchstone Charging Dock and it also charges the phone by placing it on the charger pad.

Handset manufatures having trouble getting hardware components from Japan

mohqas10 years, 1 month ago
now this is cool, i always screw up my connecters and end up suffering charging my mobile

fastfast10 years, 1 month ago
its a paradox, the charger needs an adaptor to charge your device, cant it simply just plug into the wall which would prove supreme

skblakee10 years, 1 month ago
One other thing for me is that with most if not all manufacturers using a standard mini-usb charger then these LG "wireless "charger would defeat that purpose if it cannot charge phone from other manufacturers. Am I wrong?
Also, how wireless are these chargers if they still use an adapter? What are the benefits of a wireless charger like this especially if you can't use any phone?