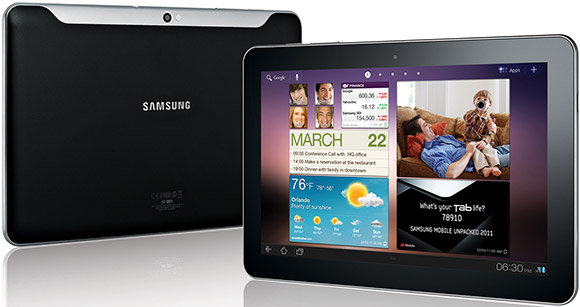 Like most Android tablets, the two new Galaxy Tabs has a 1 GHz dual-core processor. They also have what some network operators call 4G. Which is HSPA+ with maximum download speed of 21 Mbps. Even though the display size is different, the resolution is the same with 1280 x 800 pixels.

Samsung has added a couple of software features which should differentiate the two Galaxy Tabs from other Android tablets. Readers Hub and Music Hub will give users access to 13 million songs, 2000 newspapers, 2.2 million books and 2300 magazines. Samsung Social Hub merges all communication applications like email, instant messaging, contacts, calendar, Facebook, Twitter into a single interface. Samsung TouchWiz Ux is Samsungs name on a customizable home screen where social feeds, favourite web site and pictures can be arranged with ease.

skblakee10 years, 3 months ago
Oh yes I have decided

. Samsung Galaxy S 2 and the Tab. Oh yes. I believe that at the end of the day the Galaxy tab will be one of the better selling Tablets.
Oh yes!

Supa_Fly10 years, 2 months ago
Some may not share that view. creating 3 different tablets and mass marketing them with slightly different specs causes higher manufacturing costs, warranty costs, and well fragmentation amongst target user base. We'll see how this rides out though.