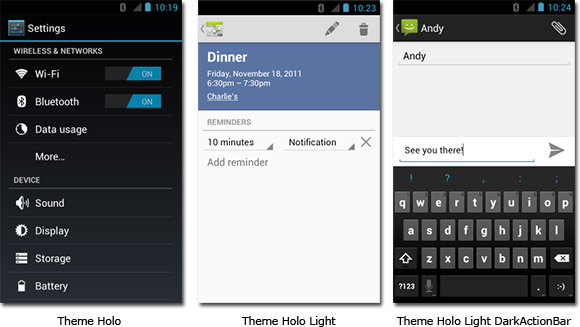 Google requires hardware manufactures of Android compatible devices to comply with the Android Compatibility Definition. Without it, devices will not gain access to several Google services. Android Market is one of these Google services. Anyone can develop their own hardware and install the open source OS on it, but they want to let the device have access to Android Market, the devices must be Android compatible.

For version 4.0 the normal requirements are display characteristics such as a screen aspect ration between 1.33 (4:3) and 1.85 (16:9). Developers of Android applications depend on these values so you will not find any 4.0 devices with a wider display than 16:9. The display must also support dynamic orientation so that any installed app can depend on portrait or landscape orientation. Other 4.0 requirements are not completely strict. It is optional that the device has as rear-facing camera, but if it does, it must have a resolution of at least 2 megapixels. These are only two of many Android Compatibility requirements. Current Android 4.0 Compatibility Definition is 26 pages long (PDF)

By developing for Android 4.0 Ice Cream Sandwich, developers know what to expect from the hardware. It has not been so easy to know what to expect of the added manufacture or operator created software. What's new this year is that hardware manufactures must include the default Android 4.0 theme Holo. Most manufactures add their own "layer" on top of generic Android to differentiate their brand from the competitors such as HTC Sense and Samsung TouchWiz. All apps running on ICS can now use Holo themes and be assured that the look and feel of the app not will change when running on a device with a custom skin.

Vipera ammodytes11 years ago
This is good, so we will have option to choose Holo or SE expirence in ICS updates for 2011 line up and new phones?

Tsepz_GP11 years ago
Great to see Google taking a bit more control of how OEMs implement Android, it may not drasticaly reduce fragmentation with updates but will make things easier for developers.

Caspa11 years ago
Thats how it should be done, good move...