One new feature called SmileCheck will ensure no picture is taken before everyone in the frame smiles. FaceTime is an addition to the self timer which will wait for an additional face in the frame before starting the countdown

FotoNation might be an unknown company name for most people, but they claim their technology are embedded in every three digital cameras sold today.

FaceTime
FotoNation today announced "FaceTime," a new technology to assist in capturing self-portraits when using digital camera or camera phones. The technology is offered as an add-on module to the FotoNation FaceTrackerT technology and is available for immediate licensing. 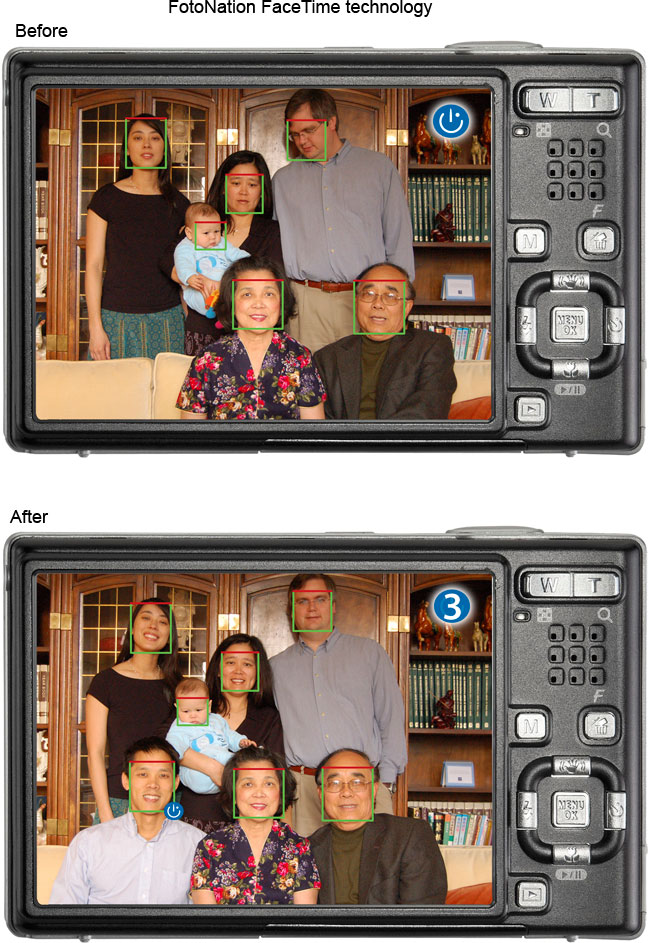 "Sooner or later, every photographer wants to be part of a photo they are composing; and until now, it has always been a cumbersome effort. We believe that FaceTime is the first new technology that brings a pragmatic solution to self-portraits," said Eran Steinberg, CEO of FotoNation, Inc

FotoNation today also announced  the availability of licensing for "SmileCheck," a new technology to detect smiles in portrait photos taken by digital cameras and camera phones.

SmileCheck
SmileCheck is an extension module of FotoNation’s currently shipping FaceTracker product line.  By monitoring the video preview stream in the cameras during framing, SmileCheck first looks for faces in the scene of the photo. Once faces are detected, the software looks for facial features associated with smiles.

SmileCheck enables a new type of picture taking mode called "Smile Shutter" in digital cameras. Once the camera’s trigger button is depressed, the shutter is not engaged until smiles are detected on all faces within the frame, ensuring photos with all smiles. Markets for this new technology include high volume portrait studios, school and event photographers, and identity photography, such as passports and badge ID cards for simplifying workflow.

"SmileCheck is part of FotoNation's growing embedded facial analysis solutions. By offering the industry better tools for understanding of the content of images, such as information about the people in photographs, we can enhance the overall picture taking experience," said Eran Steinberg, CEO of FotoNation, Inc.

Both the FaceTime and SmileCheck are being debuted at the 2008 Photo Marketing Association (PMA) Convention, held this week from January 31-February 2, 2008 in Las Vegas.

Comments
On 23 Jan 11:32 atillathehunch wrote
*coughs* Brightspark, this is not SE. read the article...
this is FotoNation

i am also aware SE has implimented this kind of technology before. and in a way yes i agree with you...i think its a load of shite
On 19 Jan 17:53 Brightspark wrote
This is sad! SE must be really desperate for new features to include if they want to include something as ridiculous and unnecessary as this. Its hardly a selling point. But then again, this is Sony
On 19 Jan 04:14 keight00i wrote
it makes me wanna think that Sony bought the rights to use this tech in their recent touch-enabled T-series models... I have a DSC-T70, and all of my friends ask me to demonstrate the smile shutter technology, and i always get "wow, nice cam!"...


i just wish sony lets SE use some of the new cybershot features on their fones...
On 18 Jan 18:28 deluded wrote
Sounds similar to the Smile Shutter function used in the Sony DSC-T2, DSC-T70 and DSC-T200.