A group of hackers called Flexilis showed up at the recent Defcon event with a Bluetooth-cracking gun they invented called the BlueSniper.

When the Flexilis team walked in with their BlueSniper Bluetooth sniper, everyone wanted to know what this evil looking contraption could do. It looks like a mutant cross between a sniper rifle and Ghostbusters particle canon, complete with nuclear backpack. Thankfully, it is a very simple device that can do one thing well: find and attack Bluetooth devices from far away.

The BlueSniper is a rifle stock with a scope and yagi antenna attached. A cable attaches the antenna to the Bluetooth card, which can be in a PDA or laptop computer. The laptop can be carried in a backpack with the cables connecting into the backpack, giving it the Ghostbusters look.

The Flexilis teams demonstrated the gun with some home-brewed Bluetooth scanning software. They pointed the gun down the hallways and out windows. Almost instantly, vulnerable phones with their unique Bluetooth device numbers appeared on the laptop screen. The device is powerful enough to detect devices through building walls. 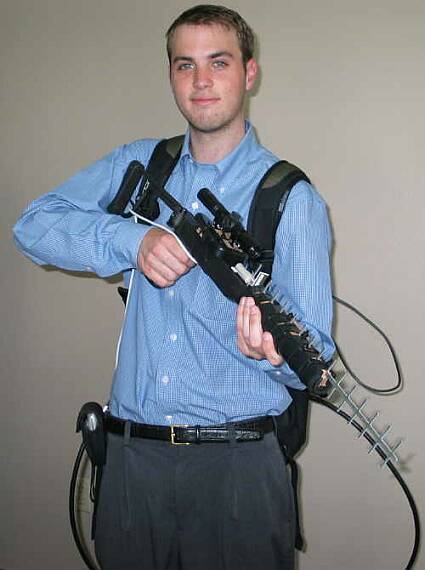 Comments
On 25 Apr 02:17 TheCracker wrote
Why is it that white people always event shit like that. whats next a laundry gun that detects what type of detergent you used and if a fabric softer was added?
On 24 Apr 22:44 Greg wrote
I read in another article more then a mile
On 5 Apr 22:31 gerry88hotmailcom wrote
how far can this work from ?