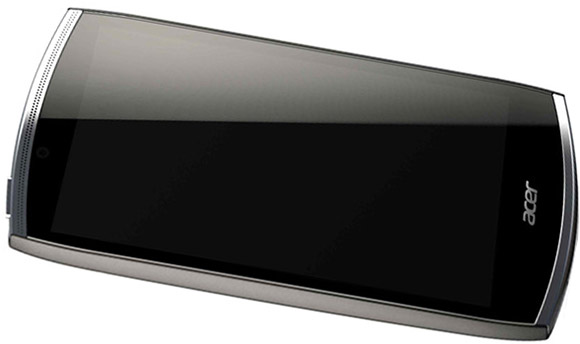 It is going to be busy first days at the Mobile World Congress later this month with a lot of smartphone  announcements. We have already seen leaks of phones by Samsung, Sony, HTC and LG which we expect are being announced at MWC in two weeks. Now it seems like we Acer's contribution to the show as well.

The web site Pocket-Lint has received pictures of an unannounced Acer CloudMobile smarpthone. The web site was sent the images when Acer claims the model has won the iF product design award for outstanding achievement in design. We have never heard of the iF award before and find it strange that Acer can win a design award for a product which not even are released yet.

We do think the Acer model pictured on this images look a little different from most smartphones but the curvy design is not new at all.

Rumoured specifications are a device running on Android 4.0 Ice Cream Sandwich with a 4.3 inch display having a 720x1280 pixel resolution and Dolby Mobile as seen on the sticker back side of the device. Acer is also introducing CloudMobile which will "enhance mobile productivity by providing seamless document management"

Google Wallet hacked without the need for root access