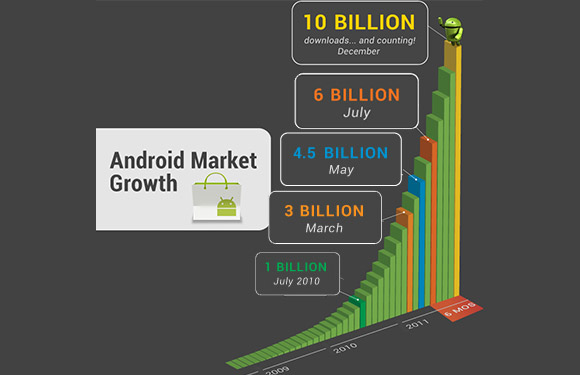 To celebrate the 10 billion download milestone which happened last weekend, Google has made several paid apps available for only 10 cent / 1 kr / 10 pence.  The first day brought us Asphalt 6 HD, Color & Draw for Kids, Endomondo Sports Tracker Pro, Fieldrunners HD, Great Little War Game, Minecraft, Paper Camera, Sketchbook Mobile, Soundhound Infinity and SwiftKey X. These apps are a mixture of games and utilities. The 10 cent offer is valid for one day only for the mentioned apps so visit the Android Market if you are interested in one of these particular nine.

During the next nine days, Google will announce further apps with a reduced price. We are using some of today's apps on a regular basis so we can confirm that some of these apps are of good quality.

According to the official Google blog, over 1 billion (1,000,000,000) apps are downloaded each month. It is a huge step over last December when we estimate that the monthly download rate was a little over 2 billion. The first official number given by google was on July 2010 where 1 billion apps was downloaded monthly. Serving 10 billion downloads looks great on paper and Google has done a tremendous job since it joined the mobile industry. But as you can see from the numbers in the illustration graph, the growth rate has started to flatten out with 1 billion more downloads each month. In the middle of 2010 an increase of 20% each month was the norm. Now in late 2011, the exponential growth has decreased to less than 10%.

Nokia is looking for buyer for its luxury mobile brand Vertu

Bonovox11 years, 2 months ago
Ooh I may buy that too

tranced11 years, 2 months ago
I know how you feel. I'd bought Paper Camera few weeks ago

Del11 years, 2 months ago
You can get ADW launcher ex for 10p today

Bonovox11 years, 2 months ago
Just downloaded that for my XPlay