Posted by Thrystan20
Hey guys! I started the 2012 topic and I'm going to start the 2013 one as well. This year it's Sony concepts, not Sony Ericsson

Let me start off with the first one: Sony Experia Folo X. It features a flexible AMOLED display and it's a 5.5 inch phablet that turns into a 7.8 inch tablet and has gaming capacitive keys on the side.

More details here at the source and in the pics below. Cheers and have a great year! Posted by razec
Great concepts there @thrystan! though Its kinda sad that I can hardly see local entries from this forum, we used to have many talented designers here

most of the then active concept designers beside me were either working on their job career or are busy studying, also the fact that we already have a dedicated website for concepts makes the thread less appealing for hobbyist.
Posted by Remort1
hi guys

i will soon be able to make new concepts, i had a very busy time because of school and other stuff...
Posted by Thrystan20
A fantastic new concept called Sony XTRUD, one that involves modular components and a beautiful minimalistic design. More details are found here. What do you think of this design? that's a great concept, looks like an ipod touch competitor, would definitely like to have one of those if it ever was produced.
Posted by razec
wow that's one futuristic concept

Posted by sponse
based on what we heard from some rumors and inspired by Litani's concept: here's the Honami concept

Posted by razec
Welcome to the concept thread sponse

we'll be looking forward to your future projects

Posted by vikeviki
Is sponse is litoni?confusing
Posted by sponse


No I'am not Litoni!
I just took his work and enhanced it IMO.

Posted by xperia_aio
litoni's work has reached conceptphonesl.com!!! great job!!! hope he got credit for it.
Posted by razec
few people may have known this but this design which dates way back 2011 resembles the doodle that maia told us at the rumors thread, and it's done by our long time buddy SE_cz 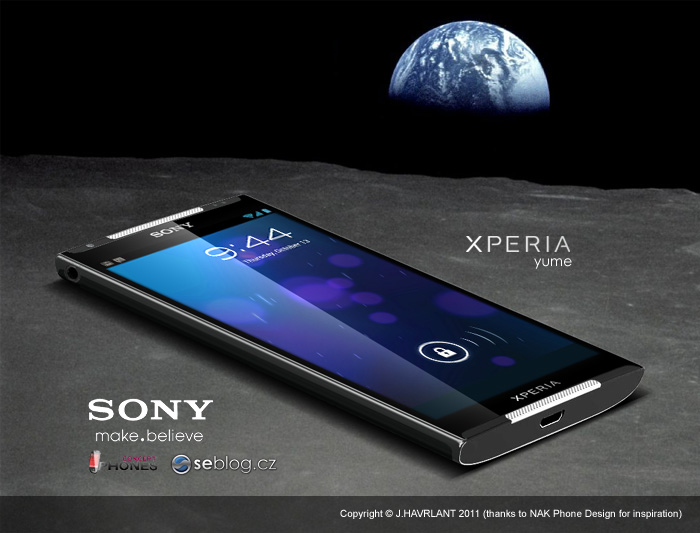 Posted by DexterMoser
^Kind of yes, at least the dual speakers.
But I would love to see a real phone with the design that maia saw.
The lights around the speakers and the speaker design itself (going from the front over the side to the back) make it look unique

Posted by reeflotz
So, while waiting for Honami to finally reveal itself here's a quick (well not really, took 2 me days

the back reminds me of TX200V
Posted by reeflotz
Thanks guys

the back reminds me of TX200V

you guessed it right, the back is indeed inspired from the TX200v when I modeled it

Posted by razec
I Just happened to love that camera, one of the few unique and stylish designs Sony has made since since DSC-G3

You even added an IR-remote, what is the other black thing on the upper side?

Posted by reeflotz
The other black thing is supposed to be the rubberized flap for the microSD slot, I know it doesn't look like one because I got lazy in the end and just rushed it, the loudspeaker was either supposed to be placed at the bottom in between the back and bottom bezel or at the side, I was no longer able to put it, I just focused in practicing to make a render that will look close to an official render from sony

. Like I said it was supposed to be a quick concept so don't take the render too seriously.

Posted by DexterMoser
And you really achieved this one (to look like an official render), many details, no rendering errors, so it's just a question of time when phonearena will steal it xD
Posted by reeflotz
lol phonearena, I surely hope they don't, but I think they only steal info from the rumors thread, just like the fake specs that was posted there months ago for phonearena to copy

Posted by razec
I'm reposting the concept(sticker) version of the rendering I did for the rumors thread last month, since I believe what maiaramdam saw could be the closest thing we've got for the magnetic dock sensor-lens accessory that was rumored to come from the SAR website. Posted by k2point0
Simply Superb
Posted by amirprog
nice forum, i would like if someone can make a phone design of my concept to give sony some more inspiration for the future phones - who knows, maybe they look at forums.
my dream design concepts, 2 versions:
1. similar xperia z glossy black design with the bezel size of lg g2, front stereo speakers like in htc one, cut out the top "sony" front logo like with the iphone which doesn't have any front logos - front logos are wasted space ("sony" and "xperia" logo only in the back).
2. second version is the same just with xperia z original bezel size - not sure about the g2 bezel - it maybe too thin and then you press the touchscreen by mistake.
best designs of the front i can think of...! the back design is less important for me.
can someone tell me how to make this concept? or maybe someone talented enough here to make it for me? will be appreciated.
[ This Message was edited by: amirprog on 2013-08-27 09:45 ]


On 2013-08-27 10:45:16, amirprog wrote:
nice forum, i would like if someone can make a phone design of my concept to give sony some more inspiration for the future phones - who knows, maybe they look at forums.
my dream design concepts, 2 versions:
1. similar xperia z glossy black design with the bezel size of lg g2, front stereo speakers like in htc one, cut out the top "sony" front logo like with the iphone which doesn't have any front logos - front logos are wasted space ("sony" and "xperia" logo only in the back).
2. second version is the same just with xperia z original bezel size - not sure about the g2 bezel - it maybe too thin and then you press the touchscreen by mistake.
best designs of the front i can think of...! the back design is less important for me.
can someone tell me how to make this concept? or maybe someone talented enough here to make it for me? will be appreciated.
[ This Message was edited by: amirprog on 2013-08-27 09:45 ]

Nice idea, let's see if reeflotz/benling/litoni could find some time to do that.

Most concept designers here primarily use photoshop, but there were some guys like reeflotz that could do even better with 3D. I once saw Muhammad-Oli did a concept using sketch, and he's really good at it. the thread is not as active as it was 3 years ago, but you can still find some folks here dedicated on sharing their ideas of an ideal sony design. I think

/Sony cocnept designers are the most numerous prior to iphone's arrival

Posted by reeflotz
so, any new concepts lately?

Just as razec said you can make one using photoshop or through 3d modeling using either Blender 3D/Sketchup/3ds Max/Maya/XSI etc. 3d modeled ones usually takes hours to make depending on how much detailed you want it to be.

and will only need it if it will be fabricated.

I don't know if Sony ever looks at concepts since there are literally hundreds of them and that Sony has their own designers, so chances are very slim for a concept made by someone to be considered by Sony. It will have to be extremely popular and liked by the majority of potential buyers for Sony even to consider it.

By the way this was razec's request that I made a month ago when info about an attachable lens came from sony alpha rumors.

I wonder what sensor that lens is using, as it's quite small, your craftsmanship is truly awesome though

I wish you could do more lens designs, would love to see them here

I'm still busy with work so I can't find time to share my ideas yet, just a couple of months more I hope and I'll return into making concepts

Posted by amirprog
thanks for the replys, i'm not a designer so i don't know how to use photoshop so much, but feel free to use my suggestions and make the concept out of it.

, concept that I was thinking is a slider android phone

, I miss the days of phones with keypads because it is still much more comfortable texting on a keypad than on a touchscreen.
Posted by razec
^^ I wish you could also do a 3D render of my previous Xperia concept with interchangeable lens (yuuko) , I have no time working on it nor do I have the sufficient skills to render it to an output as good as you would typically do

Posted by BenLing
I Had Created A Concept Of Xperia™ T1

Posted by razec
Nice one BenLing!

i think it would be interesting to have phone with detachable screens, in addition to main 4inch screen, or multiscreen function for same phones (using MHL port for watching movies with your girlfriend on the way to work or home in. public transport - thats what I'm mainly doing everyday) It would solve problems with battery saving and additional screen will be used only for specific purposes.

also the newest phones are too big to carry on by one hand. using of pod attached to wrist would solve this problem.

the foldable plastic coated aluminum pod can be fastened to any wide bracelet. the phone is attached with magnet on back side of phone.
this idea came to me using my metal office hole punch as desk holder of my phone in case with magnetic lock. Posted by zimB
please answer. i need your opinion
Posted by hydro-
Damn, I haven't posted here in YEARS.

But I do have a video coming soon for you guys to have a look at.

Anyone remember this from me?