Android 3.0 Honeycomb is designed specially for tablets, or devices with larger screen than the usual 4 inch smartphone display size. You will see the operating system running on tablets first but smartphones may get many of the features later. The user interface might not be suitable on smaller screens, but other functionality will most likely be available to other versions of Android as well. According to the latest rumors, version 2.4 will be announced soon and the first device will probably be ViewSonic ViewPad 4. Version 2.4 will have code name Gingerbread like v2.3 has. The only difference between 2.3 and 2.4 is the ability to run apps designed for dual-core Honeycomb (v3.0) apps on a single-core smartphone. This introduction covers Honeycomb 3.0.

User interface
The user interface is designed from the ground for larger displays. There are no lower limit on the screen resolution, so a 7-8 inch display with a 1024 x 600 pixels resultion would be sufficient, but most manufactures seem to land on a 1280 x 768 (WXGA) resolution. Rumors are saying that the Dell Streak 7 and its 800x480 pixel screen will get a Honeycomb update later this year. Customisation is one of Androids strength and version 3.0 brings this further by adding advanced home screen customization. All this with a 3D experience but still familiar so that both new and old Android users will feel at home right away. 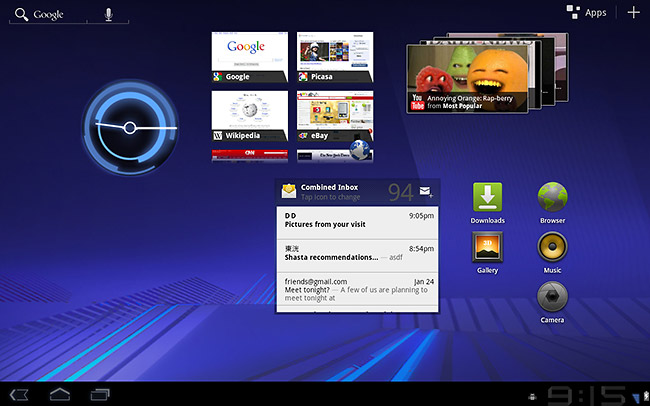 System Bar
Honeycomb does not require any hardware keys for navigation but a System Bar at the bottom of the screen is always present where the soft keys back, home and and recent apps are visible. A clock, battery status and network signal strength icons are also found on the System Bar. The System Bar can be dimmed when viewing full screen videos and similar content.

Action Bar
At the top of the screen, we find the Action Bar. It is always present when an applications is in use but the content on this bar is controled by the app, and not the operating system.

Home Screens
Five new Home screens give users access to all parts of the system from any context. To custimize the screens (desktop) the user first selects one of the four possible grouped elements and drag a thumbnail representing the content over to the choosen screen. The four groups are Widgets, App Shortcuts, Wallpapers and More. In the Widget group we will find an analog clock, Bookmarks widget, Contact widget, Email widget, Home screen tips widget, Music widget and a few more. For example: To add a analog clock to a screen, the user first select the Widget group and then drag the clock thumbnail from the bottom of the screen up to one of the frames representing the five screens. Once the clock is draged over the screen rectangle the screen frame is enlarged and a the user can choose exactly where on the screen he wants the clock to be placed. See the two images below to see how this is done.

Recent Apps
The System Bar holds three main navigation soft keys named Back, Home and Recent Apps. Clicking on the Recent Apps icon brings up a list of the running apps and lets the user swith to another active application. The list of apps are easily identify the app by showing a thumbnail of the app as the state was when the users last viewed it.

A new soft keyboard design
Google has redesigned the soft keyboard to be more suitable for larger screens. The key are reshaped and repositioned for more presise typing. Keys are not stacked on top of each other any more. They are aligned more like a standard QWERTY PC keyboard. A couple of new keys are added, such as Tab key and an extra shift key.

Improved text selection
Cut-n-past can be challenging on "small" Android for smartphones. The 3.0 tablet version has got some improved functionality where it is easy to select a word by press-hold the text and modify the selection afterwards. The selected text can be cut or copied using the Action Bar poping up. See illustration image below.

Thats the main changes to the general user interface. Some under the hood features are changed too. Android 3.0 has built-in support for Media/Photo Transfer Protocol which let you sync USB connected devices like camera or PC with the tablet. Bluetooth tethering allows other devices to share the Android tablet Internet connection.

Changes to some of the Android standard applications
The Internet browser has got tabs instead of pages. Incognito mode allows for anonymous browsing. A new feature let users automatically sign in to Google operated sites. Multitouch is possible to both JavaScript and browser plugins. We guess that means multitouch is possible also in Flash content such as games are loaded in the browser.

The camera application has got a facelift with easy access to exposure, focus, flash, zoom, front-facing camera and more. Android 3.0 also has got built-in support for time-lapse video recording. The Gallery app lets users view images in full screen mode where the System Bar fades out and the Action Bar disappears.

The Contacts and Email application has got a new user interface. Contacts has a two-pane UI and Fast Scroll to let users organize and find contacts. Better support for international phone numbers base on the home country and international number parsing library. The Email application also uses a two-pane user interface to make viewing and organizing messages more efficient.

goldenface10 years ago
It's because of Honeycomb I'm considering doing away with my Vaio, but as a touch-typer I'm frightened I'd miss the hard keyboard. I'll have to check it out.

tranced10 years ago
Honeycomb indeed is a Android mature. It gives me a feeling that this version is very stylish.

Supa_Fly10 years ago
tough choice indeed. Apple always has something incredible up their sleeves. In the end - although fresh UI's are great - its what we use IN them that make us want to continue using them past the first week: Apps, features, ecosystems.

masseur10 years ago
latest rumours are that ipad 3 will be out before end of year.
This makes me wonder if Apple are now trying to keep up with the tablet challenge now that tablets have finally been accepted (despite microsofts failure early in the 2000's), as they usually only have annual releases

upinson9 years, 6 months ago
active app can run on one core while part of the Android calls runs on the second core. This is done automatically by the OS.
[ This Message was edited by: laffen on 2011-08-11 04:24 ]