The Samsung Galaxy S4 will officially be announced in just over a week on March 14th. Specifications for the next generation flagship model from Samsung has now leaked thanks to detailed information found in the result list in the AnTuTu benchmark app. The specifications seen here are in line with earlier rumours.

Samsung Galaxy S4 will most likely be powered by a octa-core Samsung Exynos 5410 processor clocked at 1.8 GHz. The 5-inch smartphone will have a Full HD 1920 x 1080 pixel resolution and it will run on Android 4.2. Galaxy S4 will have a 13 megapixel main camera and a 2.1 megapixel front camera. It can also record 1080p video clips. 2 GB memory is installed and the device has either 16 GB or 32 GB internal storage.

These specifications could have been from any of the new smartphones announced at MWC last week. The AnTuTu benchmark app will only report hardware features detectable by the operating system. New possible features such as finger print scanner will not (yet) show up in any of these results.

What makes the Galaxy S4 special, is the octa-core processor. That's eight cores. Four ARM Cortex-A15 cores clocked at 1.8 GHz, and four ARM Cortex-A7 cores clocked at 1.2 GHz. The Cortex-A15 cores handles processing-intense tasks while the four Cortex-A7 cores are there for lighter requirements. The new Exynos 5 Octa is up to 70% more energy efficient compared to older Exynos processors. Exynos 5 Octa is the first ARM processor which has been developed with the big.LITTLE architecture which combines low-power processors with full power processors. The Nvidia Tegra system on a chip works in a similar way. Tegra 3 has four cores in addition to a fifth idle-core clocked very low. 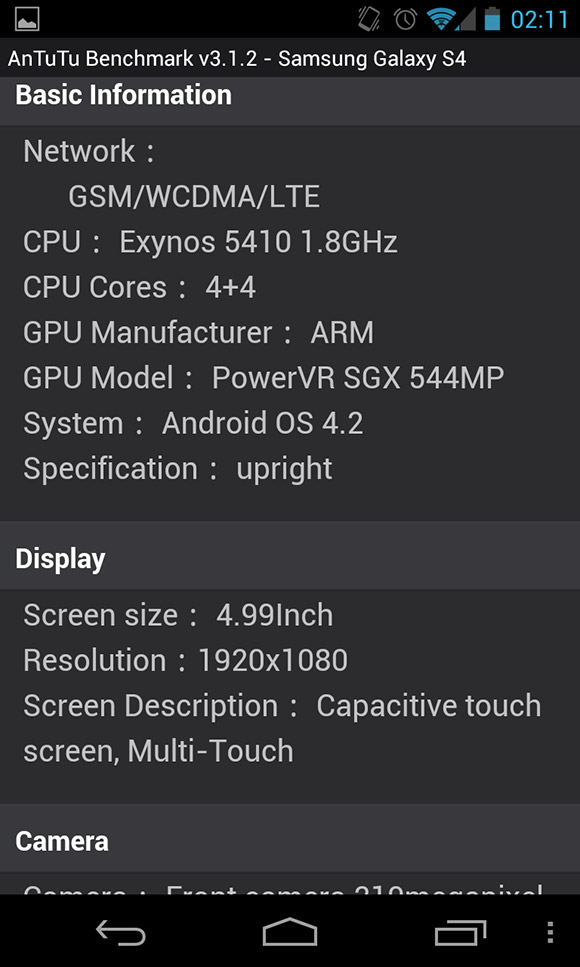 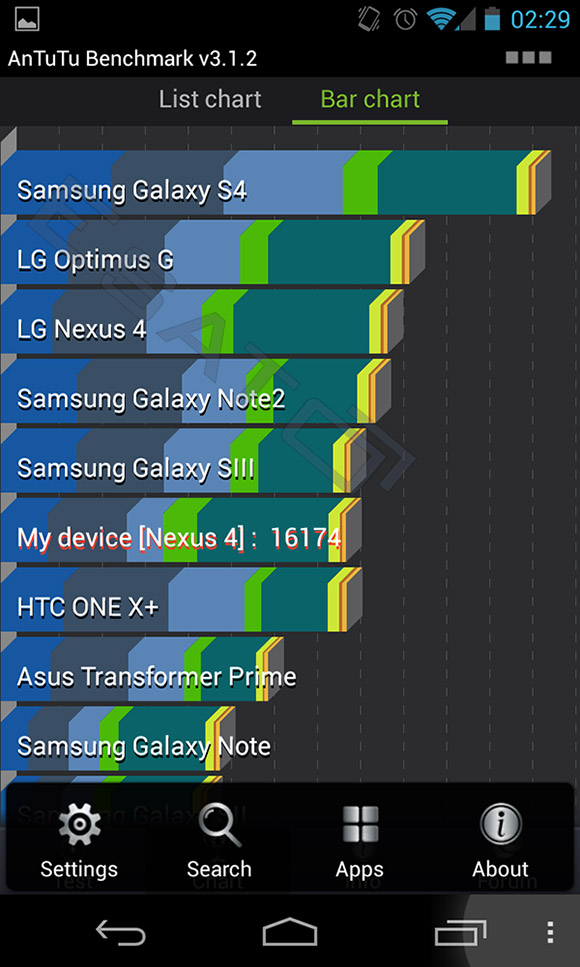 Bonovox7 years, 10 months ago
Is there a reason we need this many cores?? Hopefully the next Galaxy flagship will have an all new design with better materials

laffen7 years, 10 months ago
More cores = more computing power without having to increase the clock rate on each core. Higher clock rates generates more heat and uses more power.
[ This Message was edited by: laffen on 2013-03-04 02:51 ]

SloopJohnB7 years, 10 months ago
It doesn't matter much to me if the next Galaxy S continues to run 'samsung's version of android'. What's the point of so much hardware if you don't develop the software to take advantage of it? It's just specs.

Tsepz_GP7 years, 10 months ago
I don't get why anyone keeps asking why it needs this many cores, you must read into it.
Its an 8core CPU based on ARM's big.LITTLE platform. 4 of the cores are A15 Cortex that handle the heavy lifting when needed, while the other 4 cores are low power A7 Cortex that are meant for lighter tasks, the CPU wont use ALL 8 Cores at once, the MAIN purpose of this CPU is to use a little power as possible, its all about effeciency without losing performance.
For me the best part about this SoC is the seriously powerful GPU it has, Samsung have gone back to using PowerVR with the SGX 544 MP3 max clock at 533mHz, its performance is said to be more powerful than the iPhone5's GPU, but lower than the beast found in the iPad 4 which has yet to be beaten.
WRT SloopJohnB's comment, Samsung generally optimize their TouchWiz UI to work with the GPU, that includes the apps like S Note, the Browser etc...to, and is the reason why Samsung have the fastest and smoothest Android UI and the reason why Samsung phones have unique features like Multi-view Multitasking, pop up video, excellent video recording etc...
I'm so glad the S4 won't be running the Snapdragon 600

chunkybeats7 years, 10 months ago
this phone is going to need beefy battery because it won't last long using the same battery as the s3

Bonovox7 years, 10 months ago
@Laffen thanks i understand now. I only asked because i didn't understand why such a portable device needed such power. I know about alot of technology but i don't know everything

admad7 years, 10 months ago
Damn, when did phones become so boooooring? I remember few years ago that when a new flagship was released, it was exciting, new cool design, new features. Now what? I can predict new phones with practically 100% accuracy. Same shit rectangular design with as few buttons as possible, FullHD display around 5", 13MP camera, only newer CPU i.e. S800, wow that is sooooooo "exciting". And a battery with around 100-200 mAh bigger than it's predecessor. And it's valid for all manufactuers, well in Apple case it's same shit only screen won't be 5" but 4" and not FullHD but HD

daviep7 years, 10 months ago
Link text...
new unpacked teaser ad.wonder what type of phone the executive is using-rectangular,black,shiny/metalic back

Bonovox7 years, 10 months ago
You're right there. Practically every new phone is now the same thing as you mentioned. There's not much innovation apart from new ideas coming from the likes of Nokia imo.


This is ONLY true if the OS has the computational algorhythms to create more computing power with less clock rates - shorter threads for execution or the same longer threads with just a faster pipe. Its all relevant.
Think: I can put a 500BHP engine with 700LBS-FT of torque in your Honda Prelude or Civic it doesn't mean it'll break 0-60mph in 4 seconds jsut because of the engine; there is gearing, throttle response, fuel-air mixture ratio, compression ratio, added weight, etc that'll come into play.
Cheers.

On 2013-03-04 14:13:29, daviep wrote:
Link text...
new unpacked teaser ad.wonder what type of phone the executive is using-rectangular,black,shiny/metalic back

Samsungs marketing since the Super Bowl has been very interesting, cheesy but very cool at the same time.
The phone the executive is holding is smaller than Note2 but has the same shape, not the rounded shape of S3, nice, seems S4 will be a little bit more masculine than S3.

Bonovox7 years, 10 months ago
I would more than likely buy this over the new Sony Z anyway. Had another play with the Sony today in another store and it was just bland and boring. The screen no better than the XT. Anyway i can't afford this phone.

Tsepz_GP7 years, 10 months ago
Don't know if I'll be getting a GS4 either, but then again that's exactly what I said about S3

but I'm looking forward to this, apart of me wants to now make a leap to a phablet, maybe I'll wait until the end of this year and get a Note3.
My one and only issue with the S3 is that EVERYONE has it, especially in White, I can't stand that, I want something more rare, like what my Xperia X10 was, that's one phone that blew people away due to its gorgeous design.

Bonovox7 years, 10 months ago
According to sources the GS4 will feature eye scrolling. That would make me tired and keep losing where i am on a page. Sooner rather use the touch screen.