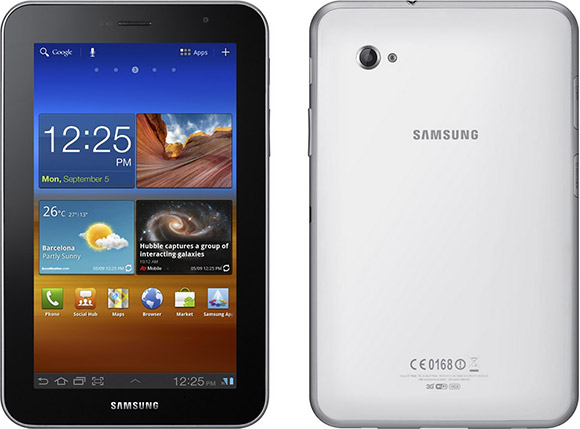 The original Galaxy was announced about a year ago at the IFA and since Android 3.0 Honeycomb version for tablets was release earlier this year, the Galaxy Tab was shipped with Android 2.2 Froyo which was optimized for smartphones. The Galaxy Tab Plus 7 announced today is running on Android 3.2 which is the latest Android version for tablets. The Galaxy Tab Plus 7 has a 7 inch touch display just as the original Galaxy Tab, it also has the same display resolution of 1024 x 600 pixels, the same megapixel count of 3 for the main camera but the front camera has been updated to 2 megapixel.

Running Android 3.2 speeds things up compared to Android 2.2. And so will the new 1.2 GHz dual core processor and the faster HSPA+ 21 Mbps network connection speed. The new Galaxy Tab Plus has reduced the weight from 380 to 345 gram and the thickness from 11.98 to 9.96 mm.

Nokia continues to reduce its workforce

julias9 years ago
Lets face it its two that really matter the iPad and the galaxy tab.

masseur9 years ago
and the Amazon fire... so thats 3 that really matter... (wait... that sounds like the start of a monty python sketch!)

tranced9 years ago
And isn't it Kindle fire?

almost every review I've seen mention book reading as a small part of what this has to offer, and most say it will be a very viable alternative to the ipad even though it has only half the features, but that most of those missing features will be easily offset by the price and the fact that the Fire can still run android apps and watch videos etc etc.
I think that time will prove those reviews to be on the mark

julias9 years ago
I disagree the Kindle fire also has much smaller dimensions than the iPad and Galaxy tab I believe the the market demand will be for 10" tablets so the kindle fire won't do as well although it will still sell well but more to the original kindle market the fire just doesn't have a USP apart from its Amazon store so people will buy for mainly that reason.There are far better 7" tablets on the market that have better features and specs.

laffen9 years ago
What about the fact that the Kindle Fire not will have access to Android Market. It's only Amazon Appstore for that tablet/e-reader. Will that be a deciding factor for potential buyers?
[ This Message was edited by: laffen on 2011-10-01 14:33 ]

masseur9 years ago
I don't think so. The Amazon android appstore seems to have a fairly comprehensive list of the most popular games and apps, and when the Fire becomes available that is likely to grow as Amazon seek to do as Apple have done and capitalise on the app earnings.
Anyway, I am certain it won't be long before the Fire get rooted and access to the google android marketplace will follow shortly thereafter

On 2011-10-01 14:19:48, laffen wrote:
What about the fact that the Kindle Fire will not have access to Android Market. It's only Amazon Appstore for that tablet/e-reader. Will that be a deciding factor for potential buyers?

That just confirms what I already believe and have mentioned. People who want a android tablet will want proper access to the Android market so this kindle is already dead in the water as real contender in the tablet market.
@masseur Not everyone wants or will want to bother with rooting this with so much choice and variety of tablets available most people want their devices to work out of the box I know I do and its why the iPad rules the market with the galaxy tab behind it.

skblakee9 years ago
What of the Galaxy Tab 7.7 with its gorgeous Super Amoled Screen?

masseur9 years ago
@julias... I think my point is, like the jailbraking on the iphone, those that want all that extra will do it, those that don't will be the kind of people that are happy with the standard (and not unsubstantial) offerings.
Getting back to the original post of this topic, and now that I am reminded of the 7.7, I'm trying to find the difference any why Samsung would release two similar spec 7" tablets... the best I can find is that they will be available in different regions. Has anyone come up with any other comparison between the two?

mrmilo699 years ago
Does this take and make calls like the original?

skblakee9 years ago
@Masseur, I wondering about the 7 inches ones as well. Why make more than one?

titus19 years ago
Samsung's oversaturating the Market with Android devices. This is not healthy anymore.