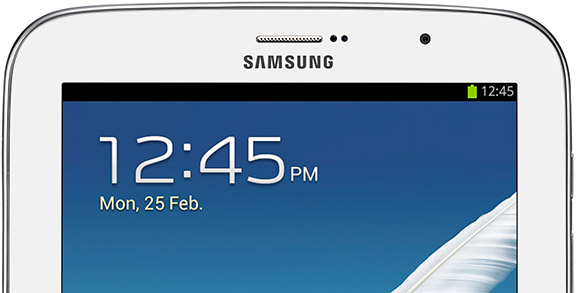 Following the previous tablet models from Samsung, the Galaxy Note 8 are accomplished with a S Pen stylus. As the name reveals, the Note 8 is a 8-inch model. Further, it has a 1.6 GHz A9 quad-core processor with a 1280 x 800 pixel TFT touch display. It has network coverage with HSPA+ and download speeds up to 21 Mbps.

In our opinion, the tablet looks like an enlarged version of one of Samsung's entry smartphone with its rounded corners. Samsung's split-view is of course one of its features. Quite useful when editing documents on a tablet. Smart Stay will prevent the tablet from go to sleep when you are looking at the screen.

Samsung Galaxy Note 8 will be available in Q2 this year.

Sony Xperia Tablet Z will be available worldwide in Q2

randomuser9 years, 11 months ago
An even uglier version of the ugly S3 and Note 2

rikken9 years, 11 months ago
Well, the S III has been a hugh success so has the Note II and this might be aswell

etaab9 years, 11 months ago
Another great product from Samsung. No wonder they're the market leaders by far.

Tsepz_GP9 years, 11 months ago
This is LITERALLY a stretched Galaxy Note 2

and check the speaker at the top, lol, can't wait to see someone on a call with one of these

On the real though, nice job by Samsung, they really did create this small tablet (7-8.9inch) market, and it has become a major battle ground between small and large manufacturers from Encipher, Barnes&Noble to Apple and Samsung, seems to be the key to taking market share from Apple.
Hope this tablet will perform just as well as the Note10.1, this is the KEY thing about the Apple iPad Mini, it maybe a smaller and cheaper than the big iPad but it performs almost as fast and almost as smooth as the iPad4 at a much lower price.
Personally don't really see the point of owning a tablet that is so small, I tried the Mini a few days ago and as cute and compact as it was, I prefer my tablets with large screens, minimum being 9inch.
[ This Message was edited by: Tsepz_GP on 2013-02-24 19:47 ]

razec9 years, 11 months ago
S-Pen is what I loved about the Notes, ever since those pens have been upgraded to support 1024 pressure levels but they need some sort of a serious graphics editing software to properly harness this strength, Photoshop Touch is too dumb for a graphics designer, not to mention Note's hardware is still too weak to run a much more powerful graphics designing app, Using this as an alternative to Wacom Cintiqs would be perfect, but since I never owned a Galaxy Note I wonder if you can use this thing as your graphics tablet, t'll be sweet if it could.

chunkybeats9 years, 11 months ago
I agree with Tsepz_GP sorry but this thing is ugly, lets just use the S3 design and STREEEEETTTCHH it! Samsung are so as bad as Apple when it comes to design, ooh lets just do some photoshop skews to our existing phone/tablet range and wow its a new product! Give me a job Samsung I could design you a gorgeous tablet! I like Samsung but their designs are becoming boring again like Apple!!

Bonovox9 years, 11 months ago
The last Samsung design that was different was the Wave Bada phones. Since then i can barely tell which is which. Boring

korbindallis9 years, 11 months ago
people may make fun of this but for some one who is using an old phone and want to jump to get a tablet can just get this and use it as both your android tab and smartphone cant wait for a full on review and pictures