We have seen a couple of spy photos of the Nokia X7-00 before, but this time a couple of leaked product images has been posted over at pocketnow. Will this be the last chance for Nokia to gain some market share in the fast growing high-end smartphone market? That is probably what the folks over at Nokia believe. Yesterday Bloomberg reported that only 500 of 800 the earlier reported job cuts will be effectuated. A successfull X7 will not change the negative trend alone, but it could be one of many upcoming models that Nokia think will lift the company.

The leaked X7 images are branded with the AT&T logo so it is reasonable to think that AT&T will get this Symbian^3 device in it's portfolio soon. 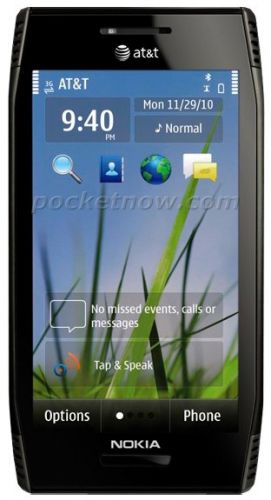 Specifications are vague, but the rumors say the four corner holes hides two and not four speakers. The X7 touchscreen smartphone has a 4 inch display with a 360 x 640 pixels resolution. The new photos reveals information about a 8 megapixel camera, dedicated camera key, 3.5 mm audio jack, micro USB connector, dual LED flash and of course a microSD card slot for expandable memory like all mobile phones in 2011 should have. The display specs are probably not worthy a flagship model, but we are sure the rest of the phone fits in the high-end segment. The question is of course what potentional buyers think of the Symbian^3 operating system.

fbloise9 years ago
this phone is ugly as hell...

Polaris9119 years ago
agree with fbloise.. I couldn't be seen with this.

tranced9 years ago
Thanks God it's for at&t.

slead9 years ago
I wonder when symbian will REALLY die...

I hope it don't... I really really like it.... I work for a major USA cell phone company (not AT&T) but still pay for AT&T service just to support my N8.... When you play with every phone and operating system every day like I do, you really learn to appreciate the stability and functionality of symbian.... maybe not everyone feels the same way, but IMO if more people actually compared the functionality and devices while giving less credence to the HYPE of Android and Apple, I think it would take off rather well.
Just my .02

xyzclanz8 years, 12 months ago
how is the cpu speed?