The Nokia N93 is the ultimate mobile device for spontaneous video recording.With uncompromised digital camcorder, telephony and rich Internet communications functionality, it features a 3.2 megapixel camera with Carl Zeiss optics, DVD-like video capture at 30 frames per second, and 3x optical zoom with video stabilization. You can see your memories come to life on the high definition display, or connect the Nokia N93 directly to your TV for a widescreen movie experience.
The Nokia N73 is a stunning multimedia computer with powerful photography features and integrated stereo speakers with 3D sound. In addition to providing the standard range of Nokia Nseries multimedia experiences, the Nokia N73 includes a 3.2 megapixel camera with Carl Zeiss optics, auto focus and support for uploading your photos to the Flickr.com photo community; all in all, a package ready to challenge any digital camera.
The Nokia N72 has high-perfomance multimedia at its core, wrapped in a beautiful pearl pink or gloss black package. The Nokia N72 offers the benefits of versatile photography, entertainment and personal productivity to people who value style as much as technology. Powerful yet stylish,the Nokia N72 is equipped with a 2 megapixel camera and integrated digital music player, with dedicated capture and music keys as well as an FM radio and support for Visual Radio.
The Nokia N93 and Nokia N73, which are based on S60 3rd Edition software on Symbian OS, are expected to be available in July 2006. The Nokia N72 is expected to be available in June 2006. 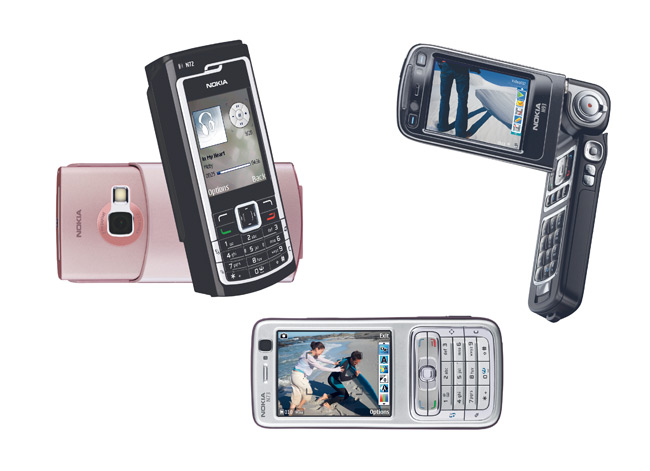 Comments
On 23 Aug 06:27 diesel wrote
rule of thum nokia then sonny erricson
On 21 Aug 15:32 MartinB wrote
In seeing the Nokia N73 and Sony Ericsson K800i side by side I have to say that the Nokia looks like the better phone. I migrated from Nokias to SE when the P800 came out. A p910 and K750 later I was all set to upgrade to the K800i when I saw the N73. The phones appear comparable, but in general the software on the Nokia looks slicker. Plus, as it's Symbian there will probably be more software available for it in the future. It also looks better - the K800 looks like an afterthought in my opinion. They are no doubt both great phones, but for me the N73 wins it.
On 24 Jun 11:39 Usman wrote
i think nokia all phone best......because sonyericsson sets has only sound.but no more thing....but nokia has various function ......and camera result is best.compare with n70 and sonyericsson w800 and w810....both has same camera result 2MP.but nokia has great zooom....and other function.....
so
nokia is best.......bussinessman also ues nokia.it made for every person...
On 23 May 14:07 Cris wrote
Nokia is best of bringing the latest in phone technology. N73 is far way better than Sony Ericsson K800. Yes it offers same camera resolution and a have decent camera lenses but Nokia N73 offers hundreds of features than Sony Ericsson K800.
On 14 May 12:48 realone wrote
sonnnnnnnny ericsson rooooooooooooooocks
nokia siries suuuuuuuuucks
On 4 May 22:21 antichrist wrote
why in the world does nokia makes phones that can rotate, twist and whatever.... ?? damn i hate those phones!!!!
On 1 May 19:00 Taj1 wrote
I Think SE K-800 is better than any siries of Nokia hand set. SE is a mother of All hitech mobile phone. From P-800 to K-800, SE is always GREAT........
On 29 Apr 14:57 mecha wrote
carl zeiss again? w800's camera is much better than n90's. n90's macro mode sucks. and the price is ridiculous...
On 26 Apr 20:40 korbindallis wrote
ugly i dont like any of em
On 26 Apr 12:34 muzzi wrote
i work in a fone shop and SE sales have fallen big time because of the fact that they brought out the same device 4 times -k750, w800, w810, w700 all these phones have the same specs with 1 more or less specs on each other. where as nokia look at the broader market, elderly, business, kids, women, and techno freaks (guys). one example of SE is p910i has been out for 1year and 7 months.
On 26 Apr 12:15 Me wrote
Somebody explain to me why the successors of the N90(N92,N93) all have worse screens than it.
On 26 Apr 07:42 CRaul wrote
Sorry... I meant HandyCam not CyberShot :P
On 26 Apr 07:37 CRaul wrote
Haha! I just hope that this pushes SE to launch that new CyberShot phone and beat n93's specs with it....
On 26 Apr 06:31 Bizzy wrote
we all know that nokia is one of the biggest handset maker of all time and sony-ericsson is just growing. By far nokia is the best, but se is very good also. I now own a se and in future will buy the n73 or n72.se and nokia rocks. When i saw the n93 i remebered the 3650, those were some horrible times.
On 25 Apr 21:42 matt wrote
that swivel camera one looks MASSIVE
On 25 Apr 21:08 Mustafabay wrote
The N73 is about as good as it can get for Nokia, and I mean it looks really good. The N93 is an upgrade to the N90 which is a respectable move but the weight is getting a little out of hands. N72 though is a good reason to hate Nokia, heck a hint from Moto would be N70 gets more colors forget changing the design.
On 25 Apr 19:41 WTF wrote
Muzzi how about you lern basic spelling ;)
New sony ericssons are far better then nokia, though the flip one looks really nice from nokia. So when will they come out? 2007
On 25 Apr 19:29 sloopjohnb wrote
se is cool, but nokia is always ahead in tech
On 25 Apr 17:36 Tiny wrote
That N73 looks amazingly much like the W800! Reddish orange sides, white front and keypad and four keys in brushed metal. Weird!
On 25 Apr 17:31 muzzi wrote
you cant get betta den nokia, carl zeiss optics, 3.2mp, auto focus, 3G and symbian software (more than just a phone). and the bluetooth works on da nokia'z.
On 25 Apr 17:26 muzzi wrote
nokia iz killin sony ericsson
On 25 Apr 16:10 Martin wrote
haha never nokia sony ericsson is the best mobile phones ever
On 25 Apr 15:02 jamssss wrote
what is that,,,a nokia phone,,,,, never mind!!!!! get lost
On 25 Apr 14:59 gaurav wrote
Sony Ericsson is the best.............
On 25 Apr 14:07 dragon wrote
hhhhhhhhhhhh sonyericsson the best
On 25 Apr 13:54 manfran wrote
Nice!