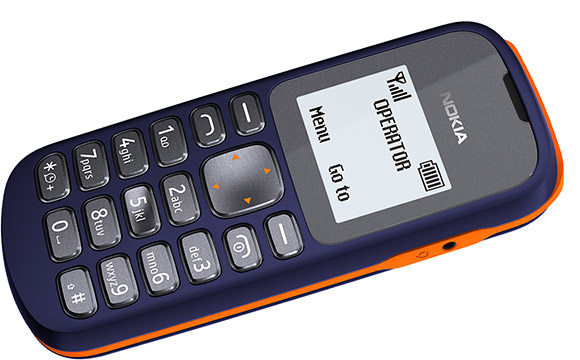 Remember the times when the world was black and white? When even mobile phones had monochrome displays. We thought that time had passed, but Nokia thinks otherwise. The Finnish handset manufacturer has not forgotten how to make phones affordable for everyone. The Nokia 103 which was announced today in Nigeria has an estimated retail price of 16 Euro.

Do not expect to get more than you are paying for. The Nokia 103 is a candybar model with a 1.36 inches display with a 96 x 68 pixels resolution. And that is obviously no AMOLED screen. You are probably aware of the Nokia naming convention which went from N, E, X and C-series names to just numbers. These numbers range from 100 to 900. The Nokia 900 is the top dog while Nokia 100 is the most accessible option. The lowest number used by Nokia 100 and Nokia 101 is already taken and to us these models seems to have better specifications than the new Nokia 103. We think the 103 should be ranked lower than the 100 and 101 because these models have colour displays and larger screens. Maybe Nokia though that there will be no phones release with lower specifications than the 100. We know now that is not true.

This is what you can expect to get for 16 Euro these days:

Toshiba announces tablets in all size. Excite 7, Excite 10 and Excite 13

Run_dawn109 years ago
Screw the Galaxy S III, HTC One X. This is where it's at.

Bonovox9 years ago
You could rely on it for signal and battery life if stuck in the middle of nowhere. Good ole reliable

tranced9 years ago
I don't know where I was reading something that the makers will head to the third world's countries to sell their phones. Their low ones of course. The article I was reading said that there's a big market going on in there.

Bonovox9 years ago
Not everyone can afford an expensive phone either. Nokia knows its emerging markets. They also still make excellent Lumia phones too

hihihans9 years ago
It's good that they make cheap phones but why does it look like any old Nokia.

On 2012-04-11 13:27:42, tranced wrote:
I don't know where I was reading something that the makers will head to the third world's countries to sell their phones. Their low ones of course. The article I was reading said that there's a big market going on in there.

in my place,specially on the countryside,nokia 1200 still very popular,5 from 10 people are using it,while the other will use old nokia symbian like N71,etc or java phone from other brand,and only 1 - 2 people using Blackberry,android are rare

etaab9 years ago
This is why Nokia still shift higher volumes of phones even if they're lower in spec and price than other manufacturers.
Always a good idea.

makulet9 years ago
I love this phone. lol