Like many mobile phone manufactures, Nokia is trying to keep up the sales figures and doing things in a new way. Other manufactures are jumping on the Android bandwagon or release a completely new OS like Samsung's Bada. Nokia have already released the Maemo, but that OS is for more powerful handsets. The E-Series is full of business models already, N-Series should be familiar and we have two phones in the X-series. The Nokia X3 and Nokia X6. C5 is the first phone in the C-series. Why the new naming convention? Well, we have 216 registered Nokia models in our phone database and Nokia has started to run out of numbers. There are already models using the same name with an added Classic, Slide or Fold. The first character in the new naming convention be one of C, X, E or N, and the following number indicates in which feature range and price category the model belongs. The number range from 1 to 9 where 1 is lowest and 9 being the highest.

It is interesting to see the number of standby time hours the C5 has got from of the 860 mAh battery. An impressive 630 hours according to the official Nokia specifications. The display size of 2.2 inch and the 240 x 320 pixel resolution is not very large, but nevertheless gaining 630 hours out of a 860 mAh battery is very good. Besides the battery capacity, C5 is a phone without that something special. And it should be reflected in the retail price. Now that Nokia has made the Ovi Maps available for free for many of its older mobile phones it is no surprise to see that C5 also will have version 3.0 of the navigation solution pre-installed.

Expected retail price is EUR 135 is a little more than a Nokia 5220 XpressMusic model and should be considered quite reasonable.

The Nokia C5 will be available in the second quarter of 2010. 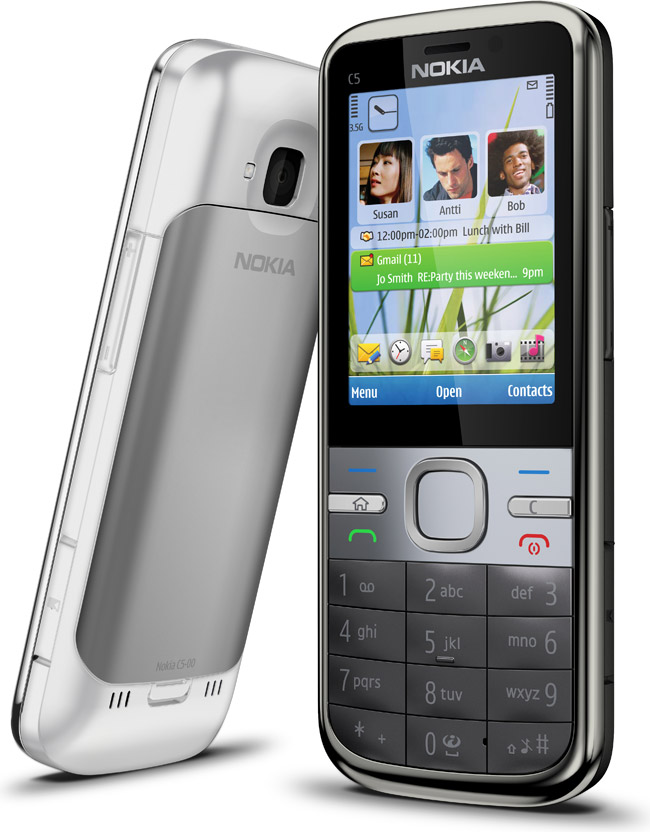 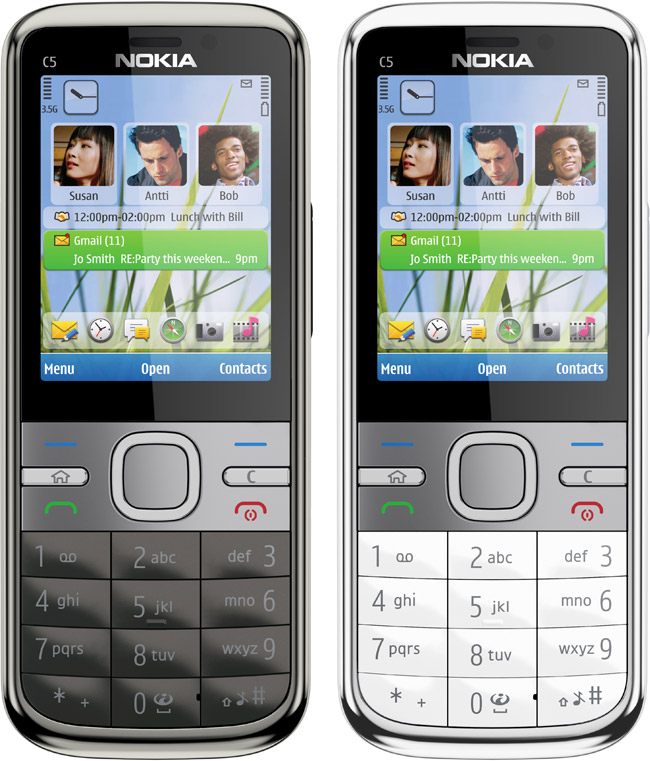 Sony Ericsson back on track with reported positive earnings

On 21 Apr 12:21 ako wrote
Nope. C stands for Catastrophic
On 20 Apr 20:50 edd wrote
how much ?
On 15 Apr 21:16 DeborahMahs wrote
Can anyone tell me how I can find out which phones have the lanyard clips and which don't - I need to find this out for every phone and I am lost about how to find out - any smart ideas?? i.e. maybe asking on this website for all of them??? help please. Thanks. Debs
On 8 Apr 16:52 FridulinderSchne wrote
The c stands for
Classic
On 31 Mar 10:24 kaillylau wrote
seems good
On 26 Mar 12:51 usmonster wrote
me too. SE is not as interesting as before. good job nokia. this phone looks awesome. hope it feels as good as it looks. unlike terrible 1100 like loud keypad!
On 21 Mar 19:57 shadowin wrote
cool
On 19 Mar 02:59 manismango wrote
how much?
On 12 Mar 19:45 GammaSharma wrote
If only it also had a touch screen interface.
On 8 Mar 09:19 xxx wrote
I must say se charms have stopped working on me. and i'm switching to nokia..
On 8 Mar 06:35 razec wrote
I liked its design, it looks fresh, and the price is right.
On 6 Mar 17:17 Aivar wrote
Good loking phone with nice specifications. Better than most of SE phones.
On 6 Mar 07:04 utouh wrote
as in c cheap plastic material. lol
On 3 Mar 05:12 alrodlop35 wrote
I assume the C stands for cheap.