The official name is QUENCH with MOTOBLUR and in the U.S it will be called CLIQ XT with MOTOBLUR. The Quench is running on Android 1.5 and has a 3.1 inch display. Version 1.5 (Cupcake) Android is relatively old now. It was release in April 2009. Version 1.6 was out in September and version 2.0 released october 2009. Motorola has already released the Motorola Milestone which is running on v2.0 so this 1.5 device was a little supprising. That being said, the difference in basic functionality and user experience is probably only noticeable for mobile phone geeks.

Being a brand new touch screen model, the 3. 1 inch display seemed a little small. The display is bright and clear, but these days, we are used to models where the display cover the entire front of the handset. Below the screen there are a directional pad plus four backlighted navigation keys. On the side, we'll find volume adjustment buttons and a camera button. The Quench has a 5 megapixel camera with autofocus. The response time when capturing an image seemed fast even though there was a 2-3 second delay befor the phone was ready for next task. It is hard to say anything about the image quality without viewing the photos on a computer display, but from what I saw on the phone itself, they seemed a little blury. That could have been caused by fingerprints on the camera lens. 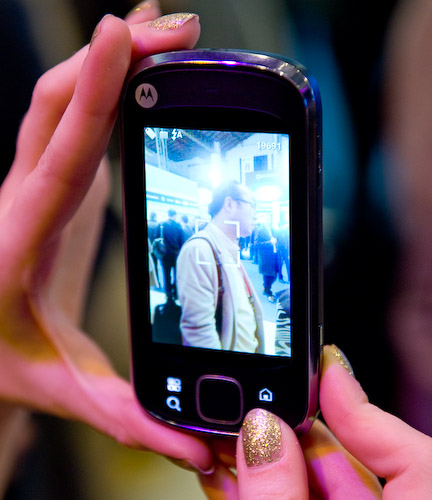 Motorola Quench does have a virtual QWERTY keyboard in both landscape and portrait mode. The keyboard can be used as a normal keyboard by pressing the keys on the screen. In addition to this, key entries can be executed by draging the finger across the virtual keys just like a touch pad on a laptop. It is a quick way to enter words and even though it might take some time to get used to, it seemed to work out very well.

As all Android devices, the Quench has several customizable home screens. Five to be exact. Widgets, shortcuts and different  backgrounds can be customized on each home screen.

If you are a English speaking user you are in luck, because the Quench is powered with voice-activated search. Just say a phrase or two in English, and Quench will search through the address book, Google or even start applications base on your commands.

No information on price, but the Quinch should be available in the beginning of quarter 1 2010. That should mean very soon as we are in the end of Q1 today.