The first sign of a 3D model was show on the web site of Phonehouse's Dutch portal. Phone House (Carphone Warehouse in the UK) is Europes largest independent mobile phone retailer, so anything being published there should be taken seriously. The unfortunately accident by a Dutch web developer gave us a hint about an upcoming Optimus 3D model. The illustration image is not of an Optimus 3D, and the feature list is rather insufficient, but the name should give us some hints about what this phone is capable of.

The second clue is the invitation sent out from LG to bloggers and press that LG Optimus is on it's way Into the New Dimension. 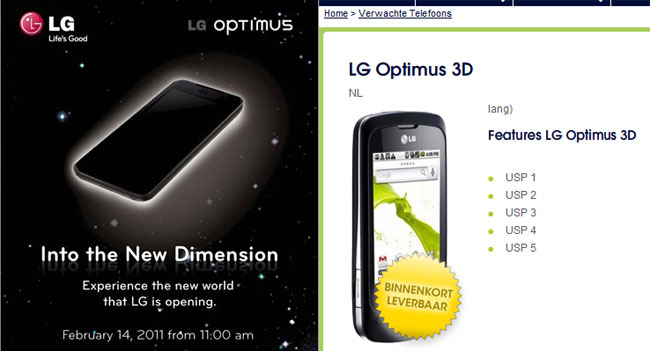 tranced9 years, 9 months ago
If LG does this they would have achieved 2 things first than other manufacturers: first dual core phone and now a 3d one.
[ This Message was edited by: tranced on 2011-01-26 02:47 ]

Marly9 years, 9 months ago
Interesting, but do we really need 3D on the small screen (compared to tv's) of a phone ?

tranced9 years, 9 months ago
Eeeerrrmmm nope. But we don't know yet what's this going to be. Either a tablet or a phone. I suppose it's going to be a tablet. A biggie.


I don't think that they will be the only one at the mobile world congress.....

Miss UK9 years, 9 months ago
lol and how much there better it will cost £1000 considering the 3D TVs are just over that mark today

Bonovox9 years, 9 months ago
What's the point of a 3D phone

MyP9109 years, 9 months ago
I think the 3D display is just a gimmick. I don't think its practical. Even I don't see the 3D effect in the glassless LG 3D TV. When looking at the glassless 3D TV, I can't see the different...
or maybe my eye is the problem.

Miss UK9 years, 9 months ago
the 3D glasses for the TVs cost about £119.99
who is gunna spend so much on a daft idea of a phone then have to buy the glasses for it to,
they don't last long

ceaser20089 years, 9 months ago
And who wants to keep it wearing all day.

petrutms9 years, 9 months ago
will not need glasses !!!

domipost9 years, 9 months ago
I think you can do cool stuf with it in the interface. The viewing angles will have to be improved though.

Bonovox9 years, 9 months ago
It's good to see LG back doing top of the range phones again. For a while they were throwing out cheap phones again think that's why their profits are down. Although I have seen some of these new 3D tv sets & they are pretty poor so I cannot see this being very good. Wearing 3D glasses or looking at anything 3D for too long gives me a headache

Many said the same back in 2k1 about color displays in mobile phones. I try to be open minded about technology, lets wait and see it first :]

Marly9 years, 9 months ago
I also try to be open-minded, but instead of all these new gimmicks, they'd better put their efforts in trying to invent better batteries.
But of course, a battery is invisible, no eye-candy, do they think we're all kids ?

tranced9 years, 9 months ago
The truth is that we have to wait till feb 14th. Either it'll have a 3d display or a super duper battery is just a matter of weeks.

domipost9 years, 8 months ago
They should add an extra dimension to both the battery and the screen