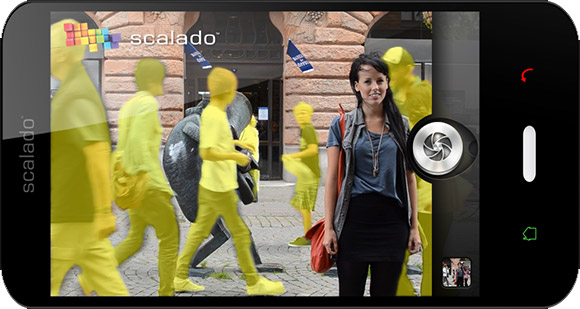 Scalado, a Swedish company having its imaging products installed in over 1 billion camera phones will soon be releasing an impressive image editing app. Consumers are now familiar with useful camera features such as image stabilisation, face detection and smile detection. The new invention from Scalado should probably by included in this list.

This is how it works: While holding the camera phone steady, several images are captured in sequence and the user are then given the option to click on elements in the photo which the technology magically removes. Similar technology can be found in computer software such as Adobe Photoshop. But where Photoshop analyses the surrounding area of the selection and do a qualified guess of what to replace, the Scalado Replace solution has several images to work with where it analyses changed elements in each image and gives the user an option to click on those he want to remove.

Sadly, the new technology will not be released as an Android or iOS app. It will only be licensed to handset manufactures and probably included in third-party mobile software solutions.

Scalado will be displaying this technology at the Mobile World Congress, and we will for sure visit their boot to find out if this works in real life.

etaab10 years, 11 months ago
So everywhere i take a picture in busy places, my girlfriend will appear alone ? i dont want deserted scenes !

Bonovox10 years, 11 months ago
That's good though. If you have something that got got in the way or spoilt the photo

Lightspeed_x10 years, 11 months ago
I like it too, hope it becomes standard.