Most of you probably know that Nokia has placed all their money on the Windows Phone platform and that the old work horse Symbian OS will be phased out within five years. Windows Phone is therefore the preferred platform for Nokia and their partners for the next couple of years. Most phones from Nokia will run on Windows Phone and while we wait for the first model to be announced we will take a look at the Nokia N9 running on the MeeGo OS. The new Nokia N9 is the first devices running on MeeGo 1.2 Harmattan and the answer we all would like know is what the future of MeeGo will bring.

The Nokia N9 is the first smartphone from Nokia running on the open source operating system. Several companies are supporting the MeeGo project but most of the hardware manufactures are using the OS for tablets, netbook and car infotainment systems. These manufactures includes Acer, Asus, Lenovo and Samsung. Intel is the core sponsor and developer of MeeGo, so the platform is for sure backed by many of the leading companies in the industry. The usual questions remains to be answered such as: Where are the apps? Will consumers buy a  high end mobile phone in 2011 where third party apps are close to non-existent? The hardware might have top spec. Latest information about market availability are that the N9 not will be sold in the US, UK or Germany. Wow! In these three countries, smartphone are the preferred type to mobile phones.

Nokia's Swedish site has set up a countdown timer on the Nokia N9 homepage. Most likely, something is about to happen in 48 days on September 23rd (on my birthday!). We are guessing the Swedish launch of the N9. Update: The countdown timer is removed for the Swedish web site but Nokia Nordic has told us earlier that the N9 will be available in Norway during September.

In our opinion, the Nokia N9 has a elegant form factor. It fits nicely in the hand and the first thing you will notice is the lack of button of the front. 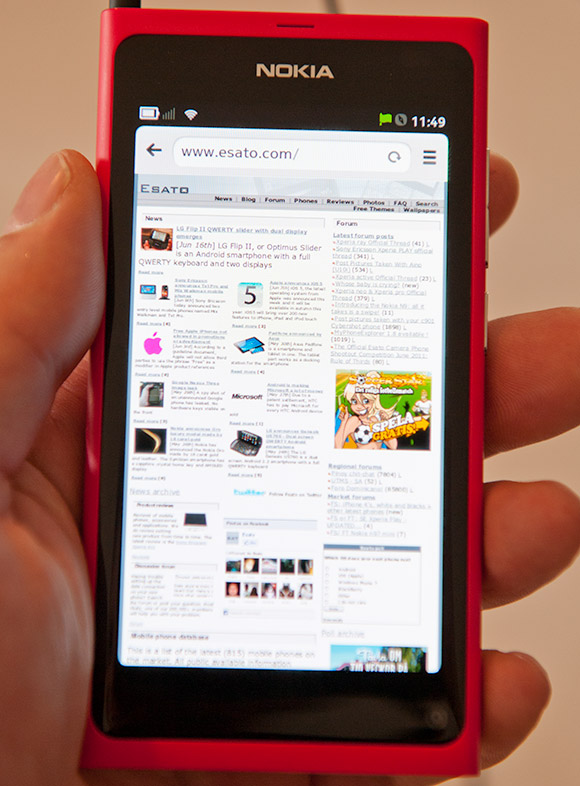 The N9 MeeGo smartphone is equipped with a 1 GHz Cortex-A8 processor which are very well capable of running any task thrown at it. According to Nokia, the N9 is build with multitasking in mind. The CPU in companion with the MeeGo operating system are very good at handling multitasking apps, and it is emphasized by Nokia that the multitasking is one of the leading characteristic of the N9.

The display is made of Gorilla Glass and the back cover is made of polycarbonate. As with the Sony Ericsson Xperia Arc, Nokia N9 has no air gap between the LCD screen and the glass which is one way of making a display with good viewing quality. It also has anti-glare polarizer. We only compared the N9 side-by-side with a Xperia Neo as that was the model we brought with us and we could not see much difference in viewing quality. The resolution of 480 x 854 pixels are also used by many Motorola and Sony Ericsson models. Droid 2, Milestone, CLIQ 2, Xperia Arc and Xperia X10 to mention a few. The resolution is high, but the best smartphones now often have a 540 x 960 resolution.

Polycarbonate is a type of plastic with good electrical insulator. It is heat resistant and flame retardant. Battery capacity will increase compared to phone models with metal covers because the polycarbonate have very low shielding to network signals.

We haven't taken a deep look into all aspects of the Nokia N9 as the Nokia folks wanted to highlight the three main home views as the "new and hot" feature:

On the left and right side, the N9 has a curved display glass and dragging a finger from left or right will browse through the three home views. There are no need to close running apps, but it can be done from the Running Application screen. Only free available memory will limit the number of running apps. Internal RAM is 1 GB.

Nokia N9 will come in three color variants. Black, Cyan and Magenta. The black edition has 64 GB memory while the two other only has 16 GB. Sadly, N9 does not have a card slot so memory can not be expanded further.

The camera has a 8 megapixel resolution and while Nokia not would comment if it had the same lens or picture quality as the Nokia N8, they hinted that it would have similar quality. Nokia N8 is well known for the good image quality. 720p HD video recording is the norm these days and the N9 is no exception.

All in all, we think the Nokia N9 is a very interesting product. It is nice to see something new and fresh and the N9 hardware has a touch of exclusiveness. The MeeGo seems stable and ready for the market, but as with all new software it will have bugs and and missing features. Nokia will need to address those quickly to gain a good reputation for MeeGo. The most interesting thing about N9 will in our opinion be the app availability. Nokia N9 will be shipped with free turn-by-turn drive and walk navigation and public transporting routing which are things Nokia are know for doing well. But the navigation package and the included Angry Birds, Galaxy on Fire 2 and Real Golf 2011 games will not be enough for demanding consumers. The want something more and will compare the MeeGo app store to Apple App Store, Android Market and Windows Phone Marketplace. Last time we checked the Apple App Store had close to 350,000 apps, Android and Windows Phone had 200,000 and 5,000 apps for download. And those numbers will continue to increase. MeeGo will not survive with just a handful of apps in the Ovi market. Will developers use their time and effort on one platform with just one phone model in the market? We do not think so. And Nokia has said their preferred platform is Windows Phone. You do the math.

The fact that N9 not will be available in US, UK and Germany could be an indication of the type of user Nokia think will buy the N9. Those who already have a smartphone will most likely stay loyal to their current eco system such as iPhone, Windows Phone or Android. Those looking for their first smartphone might be willing to try something new from the good old trustworthy Nokia.

I agree, the Nokia N9 is a very interesting product. The design is awsome

and I bet there will not be any issues with the materials used, like in the latest

SE models .
As I read some previews I couldn't help noticing it will actually be compatible with some (or most of) the Android apps

That will certainly solve the issue with the apps

As for the screen, I've seen their "Clear Black" displays and I must admit it is a treat to look at.
The interface of the MeeGo is simply superb but, as all new products will just have to wait and see how it does in "real life."
The samples from the camera that were leaked reveal great quality, not as great as that of the N8 and, given the fact that it hasn't got a Xenon flash it will most certainly not surpass the N8 when it comes to image quality. Still, the N8 has a great image sensor and is capable of great pictures in the dark, even without the Xenon so I would expect that the N9 does that to.
I'm looking forward to reading a full review on this device and I can foresee a great future for it.
[ This Message was edited by: MFire on 2011-08-12 07:34 ]