Technical details:
• HTC Google Nexus One
• LG Nexus 4
At an event in Los Angeles today, Google announced the availability of Google Music for U.S customers. After being months in beta with, the search giant released the new music service to all US residences

1 million users have already been able to test the beta service over at music.google.com for a couple of months and today Google ended the beta period and announced the availability to all US residences. Previously, an invitation was required to access the music store. Us living outside the center of the world has allways been met by, and will continue to meet this welcome screen when trying to access the music store:

Now when EMI has been bought by Universal Music, there are only three major record labels left, and two of those has joined Google and contributed to the current 8 million tracks available in Google Music. Sony Music and Universal Music Group are on the team, while Warner Music not has signed an agreement with Google yet. We are guessing there are negotiations in progress. Sony and Universal are controlling the majority of the 13 million tracks in total but only 8 million of those are available in Google Music today. The remaining five million tracks will be added continuously over the next months. Google has also signed contracts with over 1000 smaller record labels which will offer their catalog of artists through Google Music.

In addition to the services from the record labels, Google will offer independent musicians and bands the possibility to upload their own music and sell it with the usual 70/30 revenue share. It is possible for artists to create a small homepage similar to what most did on Myspace before Facebook took over. Artists can set the price for single tracks and albums them self. They can even give away the music for free if they like.

Android has passed Apple iOS as the most selling mobile operating system, both world-wide and in the US, so the Google platform will probably be very attractive to independent artists.

Google emphasized that reqomendations from friends is the most powerfull way to introduce new music to friends and family. This is now easy to do with sharing posibilites in Google+. Every time you buy music from the music store, you will be able to recommend and share the music you bought. This is done using Google+. Your friends will see your recommendations in their stream, and they will also receive a free full play of the music you purchased. Not only one track, but the entire album purchased will be available once to your followers. The sharing can be done just after the purchase, or later via any of the music players. Those of your friends not already signed up with Google+ can be added via the usual invitation email and they will be able to listen to the songs after the sign up. 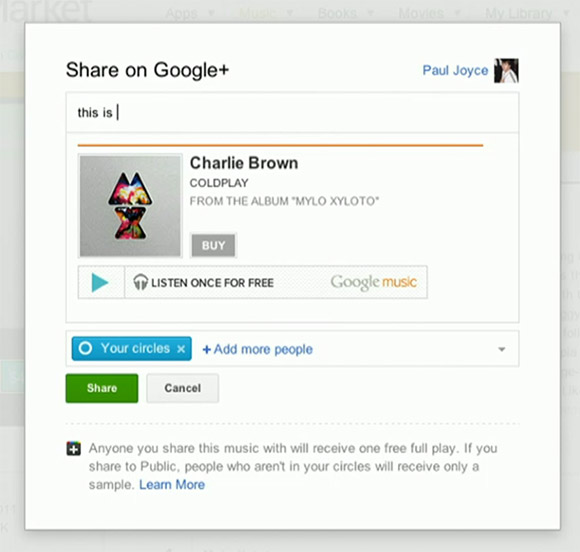 With the opening of Google Music Google announced a new version of the web music player and a new Android app. The Android Market will be expanded with a music category where all tracks and albums can be purchased.

Google today also announced that since the 100 million mark in May, they have reached over 200 million Android activations with over 550.000 new activations every day.

For those already possessing a large library of music files, Google offers a free cloud service where a person can store and stream 20.000 songs for free. At no charge. Tracks streamed and downloaded from Google Music will be in MP3 quality with a 320 kbit/s bit rate quality. 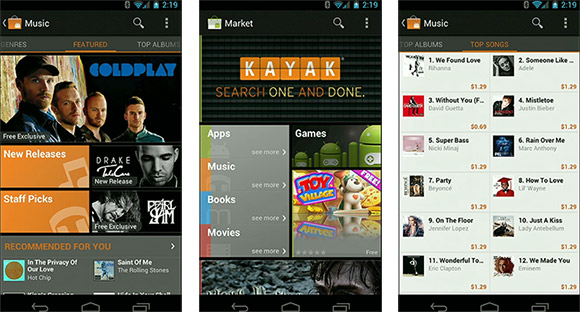 We have no further information when Google Music will be available outside U.S.

Bonovox10 years ago
This is great Google Android music store!! And that's excellent music there too Coldplay

Shame it's not outside US yet

goldenface10 years ago
Can't wait to try this out - another reason to have all inclusive data.

mlife10 years ago
Been using this for a while now while it was in beta.... really great stuff. I just hope this don't die too like so many other google projects.

laffen10 years ago
I guess Google will make money on this from day one. Unlike Google Buzz, Google Desktop and Google Labs which was spin-off projects from the 20%-time company policy