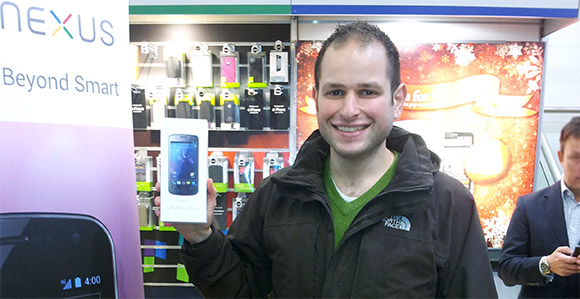 Just in time for the Christmas shopping, Galaxy Nexus made it to the stores today as promised. Phones4U sent out a notice yesterday claiming they are the first retailer in the world to offer the Android 4.0 Ice Cream Sandwich powered smartphone. It is probably a little late now, but if you are located close to the shop in Oxford Street, London you would probably be interested in knowing that the first 100 buyers will receive a $250 voucher for free movies, music and film content.

Samsung UK tweeted a picture of the worlds first Galaxy Nexus owner so the store is obviously open and ready to accept orders. Samsung will be taking over the store at 112 Oxford Street and a team of Samsung demonstrators will be on hand to take customers through the features of the handset and answer any questions.

Samsung Galaxy Nexus was announced one month ago and the smartphone is the worlds first to be shipped with Android 4.0 Ice Cream Sandwich. It has an impressive 4.65 inch display with a 1280 x 720 pixels resolution. At only 8.9 mm thick it is one of the thinnest smartphones in the market. Galaxy Nexus is powered by a 1.2 GHz dual core processor and it further has a 5 megapixel camera, NFC, A-GPS, 1750 mAh battery, 1GB RAM and 16 or 32 GB storage.

Bonovox8 years, 3 months ago
Blimey they are doing an iphone style look I got the first one now

Caspa8 years, 3 months ago
I think the title of the thread should be changed from plural to singular! P4U seem to be the only ones that have it!

adsada8 years, 3 months ago
Anyone else noticed that SE's UI is really similar to ICS Android 4.0? The task bar has room for two apps on either side of the app launcher. This makes sense though because it feels right to use being symmetrical other phones like the GS2 have the app launcher slightly to one side that is what I also hated about Android was it's 4 button approach, which IMO is too many buttons! Three is perfect, can do without a search one!
But do you think the designers at google took inspiration at SE's UI?

Bonovox8 years, 3 months ago
I have not noticed that will have another look. I hated when

Bonovox8 years, 3 months ago
Just held the funny model in my hands in Phones4U store. It's nicer looking than I thought but also bigger than I thought

This is what I mean:

The arc was my first android device so I can't say I was used to anything before that, but now I don't think I would like if the back button being on the right it just seems correct that it should be on the left imo. And actually ICS adopted the back button on the left too, another feature taken from

Bonovox8 years, 3 months ago
Oh right ok. Phones4U store today. Thinking of the so called 'copy cat' Samsung/Apple designs this one is nicer than ANY Apple design anyway. So if Samsung felt the need to copy Apple designs then they must have been mad cos Samsung's own designs are much nicer!!

Miss UK8 years, 3 months ago
its a Copycat HTC Sensation

iPhone? neh way lol why is apple always sumed up in these topics

Bonovox8 years, 3 months ago
Because Apple are always up Samsung's backside

Miss UK8 years, 3 months ago
hmm maybe on other enlisted things but this looks nothing like a iPhone anyway
all I can say its looks like a HTC Sensation and maybe HTC should press charges against these lot

Bonovox8 years, 3 months ago
Looks nothing like the Sensation

If you seen it in Phones4U which I did it's certainly not like it. It's actually more akin to normal Samsung designs

Miss UK8 years, 3 months ago
The shape of it is very similar the touch buttons aswell !
lets see what the Sensation is like when that gets 4.0

Bonovox8 years, 3 months ago
When will this end,most touch screen phones have a curve or square design of some sort. What do people expect Samsung to do?? Make a triangular phone or a round one??

The Xperia Play,Neo & Pro all have a curvy rounded design nobody says anything about that. Why is it oh Samsung are copying EVERYONE. They are not as I said alot of touch screen phones have similar shapes or designs
[ This Message was edited by: Bonovox on 2011-11-21 17:17 ]

Miss UK8 years, 3 months ago
its exspected of them to come up with there own idea and submit phones
accordingly thats all...
first thing that came into my head was it looked like my HTC defo nothing like my iPhone,
anyway Samsung fanboy chillax ... its only a phone calm down dear

anonymuser8 years, 3 months ago
Samsung just don't have a lot of originality in their designs, it's not in the DNA - I can't really think of anything they've that, if not a direct copy of something, wasn't just very bland and generic looking.
Fair play to SE, their android phones are generally quite distinctive, and HTC have tried a few different styles, even LG have the odd one-off design in their phone history (though maybe not in android) but Samsung.. Not so much.

On 2011-11-21 18:22:48, Miss UK wrote:
its exspected of them to come up with there own idea and submit phones
accordingly thats all...
first thing that came into my head was it looked like my HTC defo nothing like my iPhone,
anyway Samsung fanboy chillax ... its only a phone calm down dear

Why does everyone think I am some Samsung fanboy with a short temper?? I am not angry just irritated by people always getting at Samsung. I love most brands have tried most I am no fanboy just tired of hearing Samsung does direct copies of EVERYTHING. They don't & like I said design in many Samsung devices as is NOT a copy maybe slightly similar to others but that is true of many phones. And as for boring design,the Iphone is very boring & Miss UK just months ago you were slagging off the iphone for not changing it's design

Please do not say calm down it's just a phone I am not stressed I just get bored & tired of people constantly saying oh it looks like something else. Have you nothing better to say?? I have had my say on Apple & no I don't like them either. But I don't keep going on & on & on about it. Seriously

rikken8 years, 3 months ago
If the S II was a copy of the iPhone4 it would have had the same volume buttons, same power button, a silent button and a tiny screen

And it would have been to heavy for its size

the home button is a different shape too. As for the Nexus looking like a Sensation,where?? The curved screen?? No. The capacitive buttons underneath the display?? No. They are different design & again,most touch screen phones on Android especially have the similar capacitive buttons

I do often wonder where this comparison crap will end.

etaab8 years, 3 months ago
Im not sure if anyone or just Miss UK is aware, those three buttons at the bottom of the Nexus display are actually the screen sAMOLED, they're always on when in the phone menus but disappear when the phone plays videos or in full screen apps. The Galaxy Nexus has no buttons on its front at all, just its screen, sensors, earpiece and a status LED.
So no, its nothing like the Sensation.

Miss UK8 years, 3 months ago
Hah etaab but its still curvey like Sensation
I dont care tbh it looks like a Sensation to me anyways

Bonovox so what if I said that Design of it does
Look copied down but under the hood thats the main thing.
Also says the person who changes phones more times then
Any clobber, when u change ur phone again u will find
Something to bitch about anyway u always do

On 2011-11-21 20:29:35, etaab wrote:
Im not sure if anyone or just Miss UK is aware, those three buttons at the bottom of the Nexus display are actually the screen sAMOLED, they're always on when in the phone menus but disappear when the phone plays videos or in full screen apps. The Galaxy Nexus has no buttons on its front at all, just its screen, sensors, earpiece and a status LED.
So no, its nothing like the Sensation.

etaab8 years, 3 months ago
I forgot the link to a video but someone asked if those buttons show up the whole time, a video demonstrated otherwise. They show up but when not needed vanish and the video playing goes full screen. Its still not what id like to see, split screen use on a mobile phone. Imagine watching a movie and not being forced to pause it to write a sms, if the movie would still play either split screen or in a small postage size stamp corner of the screen whilst you use the phone for another feature. Its something ive always wanted and something i think might be possible with quad core processors and Jellybean.. ?

Bonovox8 years, 3 months ago
Well,in my GS2 there is a setting where you can choose weather to have the capacitive buttons on,all the time,or just in the dark. So although it's not buttons on this model it may still have similar setting we hope.

bavlondon28 years, 3 months ago
When is this going to be out on 3uk?

Bonovox8 years, 3 months ago
Just looked on Three website & it's showing on pay as you go for a whopping £499

bavlondon28 years, 3 months ago
Just got mine.

Bonovox8 years, 3 months ago
Oh cool congrats. Maybe you are the first on Esato. How is it??

SE-Naz8 years, 3 months ago
What do you think of it bavlondon2?
Initial impressions
More comments