In addition to EAs major investments in the Sony PSP, Nintendo DS and Nokia N-Gage, the company announced plans to build on the success of its franchises such as FIFA Football and Tiger Woods PGA TOUR® in the mobile gaming space. Beginning this year, EA will produce and develop titles that will continue to bring mobile phone gaming experiences to consumers that are consistent with their already well-loved console games.

To secure strong distribution of its mobile franchises, EA announced the reinforcement of its existing partnership with Digital Bridges, a world leader in the creation and distribution of mobile entertainment solutions. The new agreement extends the current licensing relationship between the two companies to a comprehensive arrangement in which EA will make use of Digital Bridges mobile-specific development expertise, connectivity technology, and multi-channel distribution network to maximize the presence and sales of top EA titles in the mobile space. EA will partner with Digital Bridges through an agreement that spans Europe and North and South America.

In his keynote address, Gerhard Florin commented, Looking ahead, there will be much excitement about the opportunities offered by taking gaming outside. There is still a long way to go in the evolution of mobile gaming as technologies advance and as consumer tastes become clear, and EA looks forward to being a part of this evolution.

Commenting on the agreement with Digital Bridges, Mr. Florin said, Digital Bridges has a deep understanding of this market, and building on our past three years of working together, they continue to be our ideal partner as the mobile games market moves into its next phase of growth and maturity. Consumers around the world are increasingly moving to interactive entertainment, and while we create and produce games for the mobile platform, the expertise of Digital Bridges will help us bring new opportunities for game players to join the trend with the familiar, user-friendly format of the mobile phone.

Brian Greasley, CEO of Digital Bridges explained, This agreement is not only a vote of confidence in Digital Bridges, it is also a fantastic endorsement of mobile gaming.  We are thrilled to be partnering with the worlds most successful videogames company, and very excited at the prospect of bringing mobile gaming to a whole new level with EA.

EA SPORTS   FIFA Football 2004 Mobile International Edition and EA SPORTS Tiger Woods PGA TOUR® 2004 were Top 10 in the mobile charts for much of last year, with over one million cumulative paid-for downloads in Europe alone. Building on that momentum, three EA titles are planned for release to mobile platforms in 2004: FIFA Football 2005; Tiger Woods PGA TOUR 2005 and Need for Speed Underground 2. In addition, a mobile phone version of The Sims will be available in 2005. EA will announce plans for the launch of further mobile titles in the months ahead. 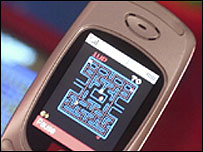