The Samsung Blue Earth was first seen at the Mobile World Congress in Barcelona earlier this year but Samsung today officially launched the new Eco-model.

Blue Earth is made from Post Consumer Material (PCM), which is extracted from water bottles, helping to reduce fuel consumption and carbon emissions during the manufacturing process. The device, including the charger, is free from harmful substances such as Brominated Flame Retardants (BFR), Polyvinyl Chloride (PVC) and Phthalate. The packaging for Blue Earth is designed to be compact. The package is made from easy-to-recycle paper and printed in soy ink. It also suggests a simple DIY idea to reuse the package as a photo frame or a pencil box.

Blue Earth comes with a 5 star energy efficient charger which uses only 0.03W of power in standby mode. As part of the Voluntary Agreement of European Commission IPP (Integrated Product Policy) pilot program, Samsung has agreed to start showing ratings on energy consumption on the no-load mode of the mobile device charger. Furthermore, by charging with the solar panel located on the back of the phone, users can generate enough power to use the device anytime and anywhere. Solar energy is considered one of the most eco-friendly energy sources and it helps users reduce usage of energy from non-renewable sources.

A 5 start eco-charger is included in the package, so you can even re-charge the phone when the sun in down.

Samsung Blue Earth is launching in Sweden in October and will soon launch in France, Germany, Austria, Italy, Portugal and other European and Asian countries.

Note: It seems like the Blue Earth has got a face lift since the first announcement in February. Notice the added front camera on the later version. The display resolution seems have changed from 240x320 to 240x400 pixels 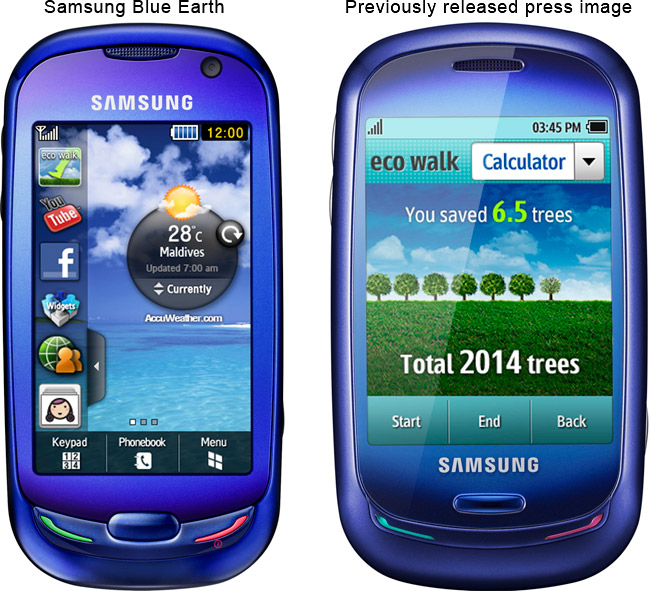 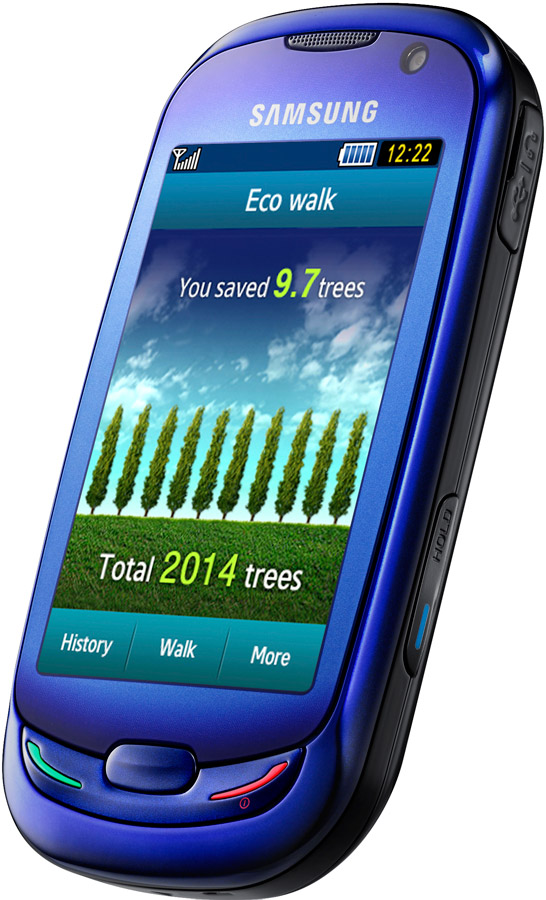 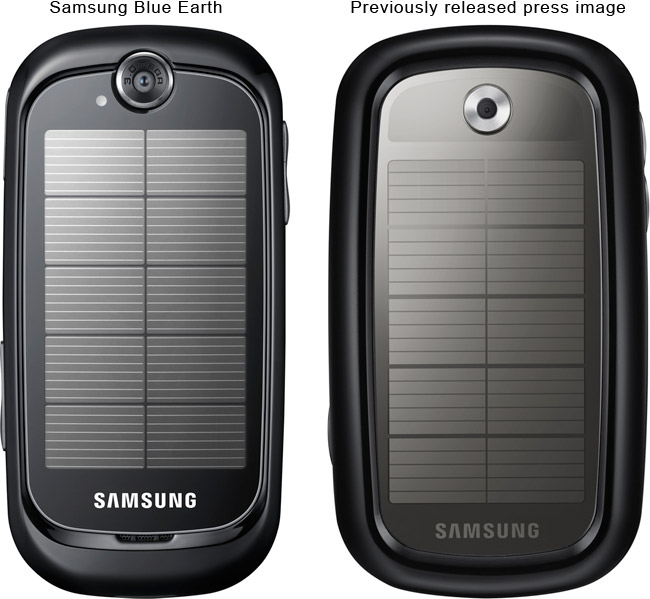 Comments
On 31 Oct 02:44 shawbrown wrote
samsung phone are the best phone on the market right now, go samsung u rock keep making phone the way you do. pace
On 16 Oct 14:50 GammaSharma wrote
Echo Walk, I guess, calculates the amount of trees saved by walking per day instead of using Petroleum or something. Great phone in terms of concept and gesture towards spreading awareness of the environment. Hope the Solar panel gives the battery good backups.

Wish it had a flash to it.
On 15 Oct 13:47 Greenwalk wrote
Great phones. I really like these kind of gadgets, even though the practical use of such a solar charger may be minimal the idea is good.
I think this phone runs on Touchwiz as well:
http://www.samsungtouchwiz.nl
I also very much like the blue colour. Can anybody tell me what the "eco walk" applications calculates?